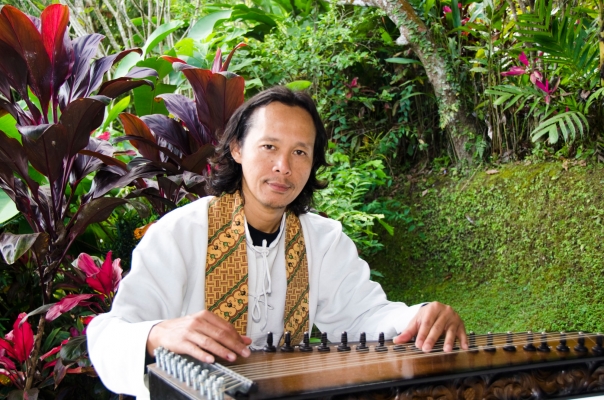 Spring Quarter Visiting Artist Ade Suparman, instrumentalist and composer, performs with his students in this concert of Sundanese music from West Java, Indonesia. Featuring traditional and contemporary Sundanese music and dance, including music composed by Ade Suparman, the concert  will showcase two types of gamelan ensembles--gamelan degung and gamelan salendro--a family of Sundanese zithers called kacapi, and bamboo flute called suling.  Ade Suparman and his students, who will be playing in the gamelan ensembles, will be joined by a number of special guests, including ethnomusicologist, vocalist and School of Music alumna Sean Williams (Evergreen State College).  Dances will be performed by guest dancers and UW students.

The island of Java, one of Indonesia’s many islands, is home to over half of Indonesia’s 250 million people.  A rich variety of distinct cultural traditions are closely tied to different ethnic groups and different places on the island.  Tonight’s program features music and dance from West Java, and in particular, music and dance of the ethnic Sundanese.

We open the evening with tembang Sunda (Cianjuran), a genre of aristocratic sung poetry that developed in the mid-19th century.  The sung poetry is often accompanied by zither (kacapi) and bamboo flute (suling).

Tonight we begin with the compositions “Rajah” and “Papatet” as a set, followed by the set “Mupukembang—Goyong—Balagenyat.”

We turn next to kacapi-suling, a small ensemble of one or more zithers (kacapi) and bamboo flute (suling) that developed in the 1970s. The larger kacapi, called kacapi indung, provides a rhythmic and melodic framework.  The smaller one, kacapi rincik, plays ornamental abstractions of the patterns from the larger instrument.  The suling plays not only the vocal melody, but also the cues and interludes that would normally occur between verses.  It is derived from the fixed-rhythm style of tembang Sunda called panambih, but without voice.

Next on the program is music played on gamelan degung.  Gamelan are ensembles largely composed of gongs and keyed percussion instruments.  There are many different kinds of gamelan in West Java and other parts of Indonesia, and gamelan degung is one type of gamelan from West Java.  The gamelan you see tonight includes instruments made from bronze and from iron.

The first degung piece is “Tepang Asih.”  This is followed by “Ayun Ambing,” a traditional Sundanese lullaby referring to the rocking of a baby or small child to sleep in a sarong.  Notice the poetic structure of the Sundanese text in which each line ends in “ing.”

We then enliven the atmosphere with Tari Merak or Dance of the Peacock, a female-style dance.

Merak means peacock and the choreography is inspired by the beautiful movements of this bird.  The gestures of a proud peacock showing its gorgeous feathers are blended together with the classical movements of Sundanese dance to symbolize the beauty of nature.

Originally choreographed by Raden Tjetje Somantri in the 1950s, over the years it has been developed and revised. This dance is accompanied by a bronze gamelan salendro, which features instruments that are similar to those in gamelan degung, although the tuning system is different.

When gamelan is used to accompany dance, there is an intimate relationship between the dance movements and drumming patterns.  The dance is followed by “Marudah,” a Sundanese contemporary piece composed by Ade Suparman in 2005.  Marudah means “unconsciously moving while dreaming or asleep.” This piece depicts various situations or experiences when we are asleep and do not realize that our body is moving in response to something that we are dreaming.

Tonight the piece is performed by a small ensemble featuring kacapi, violin and requinto.

Bringing the first half of the concert to a close, we return to gamelan degung with the compositions “Renggong Buyut” and “Palwa,” and then conlude with “Gaplek Dance,” here performed to recorded music. “Gaplek Dance,” a  comedic dance, portrays men competing for the attention of a female dancer—here performed by the master dancer Nurrika.  Who will win her favor?

We begin the second half of the concert with another Sundanese contemporary piece composed by Ade Suparman, “Kidung Giri Kesuma.”  This piece depicts the beauty of nature in a village on the island of Bali named Giri Kesuma.  “Kidung” means song, “Giri” means mountain and “Kesuma” means beautiful flower, thus the piece could be roughly translated as Song of Beautiful Flower Mountain.  The music captures the sonic environment such as the sounds of wind, rain, and water rippling in a river—sounds that can touch the depths of one’s soul.  This is followed by two pieces for gamelan degung, “Lutung Bingung” and “Pajajaran.”

Both the dance and the music combine Sundanese and Balinese traditions.  For example, while the music is played on Sundanese gamelan degung instruments, Balinese influence can be heard in the type of interlocking patterns played on the bonang.

In Balinese gamelan these patterns are traditionally played on a row of pot gongs called the reyong.  In the choreography, Nurrika also includes Western styles, which she has experienced through international travel. Tari Kandagan (Kandagan Dance), here performed by Nurrika, portrays a strong, dashing princess character.  Performed by female dancers, this dance is a new creation that was developed by Raden Tjetje Somantri in 1960 from an earlier dance that he choreographed in 1958 called Renggarini.  The word “kandagan” means container or jewelry box—that is, a place to store jewelry and other valuables.  The name of the dance (Kandagan) can thus also refer to the dance being a “container” (that is, a collection) of dance movements.  A gamelan salendro ensemble provides the accompanying music.

Ade Suparman, instrumentalist and composer of Sundanese music, was born in Purwakarta, West Java, in 1969. He started playing kacapi when he was 10 years old with his father. He then studied music theory and classical music (including vocal, Suling, Kendang and Gamelan) at Indonesia Art School (SMKI). He received his BA from Indonesian Art University (ISI) in Surakarta.

After his studies, he performed as a concert kacapist around the world. Besides performing, he has created a new learning method for Suling (bamboo flute), and has also published several method books for Sundanese instruments - Suling, Gamelan and Kacapi.

Ade has been a member of professional folk and classical music groups in Bandung, performing on Kacapi and Gamelan. He has recorded Sundanese traditional and contemporary music with well-known composers in West Java.

His travels abroad have taken him to India, South Korea, the Netherlands and the USA. While in the Netherlands, he performed as a kacapi soloist in Utretcht and Den Haag, and also taught Sundanese music in Stichtings Kunskring Siliwangi-Panglipur. He also teaches regularly in Bali for the San Diego-based Center for World Music.

As seen on this evening’s program, Nurrika is also a gifted choreographer of new dances.

Sean Williams, special guest vocalist on tonight’s program, teaches ethnomusicology, Irish Studies, and Asian Studies at The Evergreen State College in Olympia, where she has taught since 1991.

Her gamelan degung and angklung (bamboo rattle) ensembles have performed at multiple venues in the Pacific Northwest, including the Northwest Folklife Festival. She studied Sundanese vocal music with the late singer Euis Komariah, and her book, The Sound of the Ancestral Ship: Highland Music of West Java, is about tembang Sunda (aristocratic sung poetry).

***Ade Suparman’s residency has been made possible by the generous support of the University of Washington School of Music and the University of Washington Southeast Asia Center, for which we in the Ethnomusicology Program are grateful.  Many thanks go to Tikka Sears and Manuel Castro for so graciously hosting Ade Suparman and Nurrika, and to Tikka Sears for helping to organize this concert and Ade’s residency.