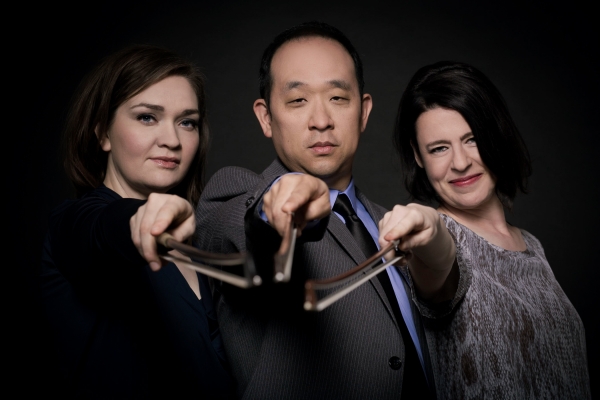 Frequency is a new Seattle-based ensemble, joining together distinguished artists from two acclaimed chamber groups, the Corigliano Quartet and Decoda. Made up of Michael Jinsoo Lim (violinist and artistic director), Melia Watras (violist) and Sæunn Thorsteinsdóttir (cellist), Frequency is a modular chamber music group, breaking into different parts to present solos, duos and trios, while also expanding with renowned guest artists to perform in a variety of formations. Frequency members have performed as soloists and chamber musicians worldwide, in leading concert halls such as Carnegie Hall, Alice Tully Hall, Weill Recital Hall, Suntory Hall, and Disney Hall. The ensemble begins presenting innovative, invigorating and intriguing concerts in the 2016-17 season.

Violinist Michael Jinsoo Lim has been praised by Gramophone for playing with “delicious abandon” and described as “bewitching” by the Seattle Times. He is concertmaster and solo violinist of the Pacific Northwest Ballet Orchestra (“surely the best ballet band in America”—New York Times) and is in-demand as a chamber musician and performer of new music. Hailed by the Los Angeles Times as a “conspicuously accomplished champion of contemporary music” for his work as co-founder of the renowned Corigliano Quartet, Lim is also artistic director and violinist of the Seattle-based ensemble Frequency.

As a member of the Corigliano Quartet, Lim has won numerous awards, including the Grand Prize at the Fischoff Chamber Music Competition and the ASCAP/CMA Award for Adventurous Programming, and has performed in the nation’s leading music centers, including Carnegie Hall, Weill Recital Hall, and the Kennedy Center. The quartet’s Naxos label CD was honored as one ofThe New Yorker’s Ten Best Classical Recordings of the Year.

Lim attended Indiana University, where he was a pupil of the legendary Josef Gingold. He later studied chamber music at the Juilliard School and taught there as an assistant to the Juilliard String Quartet. He currently serves on the faculty of Cornish College of the Arts. Lim has recorded for Naxos, DreamWorks, Albany, Bridge, CRI, Bayer Records, RIAX and New Focus, and has been heard on NPR programs such as Performance Today and All Things Considered.

Hailed by Gramophone as “an artist of commanding and poetic personality” and described as “staggeringly virtuosic” by The Strad, violist Melia Watras has distinguished herself as one of her instrument’s leading voices. She has performed in major venues such as Carnegie Hall, Weill Recital Hall, and Alice Tully Hall, while achieving acclaim as an important recording artist. Watras has recorded 5 albums, while performing on 13 others as a chamber musician. Upcoming highlights include the release of her latest disc, 26, which features world premiere recordings of her own compositions, and video projects with violist Garth Knox (performing with Knox on his duos, Viola Spaces for Two) and video artist Ha Na Lee.

Watras’s discography has received considerable attention and praise from the media. Ispirare made numerous Best of 2015 lists, including the Chicago Reader’s (“Watras knocked the wind out of me with the dramatically dark beauty of this recording.”) Short Stories was a Seattle Times Critics’ Pick, with the newspaper marveling at her “velocity that seems beyond the reach of human fingers.” Of her debut solo CD (Viola Solo), Strings praised her “stunning virtuosic talent” and called her second release (Prestidigitation) “astounding and both challenging and addictive to listen to.”

With the Corigliano Quartet, Watras has concertized and recorded extensively, with the ensemble’s Naxos label CD being named one of the Ten Best Classical Recordings of the Year by The New Yorker. She is violist of Frequency, for whom she has also composed, and as a member of Open End she has performed in France, Denmark and the United States and recorded for Albany Records.

Watras studied with Atar Arad at Indiana University and served as a teaching assistant to the Juilliard String Quartet while at the Juilliard School. She is currently Professor of Viola and chair of Strings at the University of Washington School of Music, where she holds the Adelaide D. Currie Cole Endowed Professorship and was previously awarded the Donald E. Petersen Endowed Fellowship and the Royalty Research Fund. Watras has given viola and chamber music classes at schools such as Indiana University, Cleveland Institute of Music, Strasbourg Conservatoire (France), and Chosun University (South Korea). She has twice returned to her alma mater, Indiana, to teach as a guest professor.

“Riveting” (New York Times) cellist, Sæunn Thorsteinsdóttir, has appeared as soloist with the Los Angeles Philharmonic, Toronto and Iceland Symphonies, and her recital and chamber music performances have taken her across the US, Europe and Asia. Following the release of her debut recording of Britten’s Suites for Solo Cello on Centaur Records, she has performed in some of the world’s greatest halls including Carnegie Hall, Suntory Hall and Disney Hall. The press have described her as “charismatic” (New York Times) and praised her performances for their “emotional intensity” (Los Angeles Times).

As a chamber musician, she has collaborated with Itzhak Perlman, Mitsuko Uchida, Richard Goode and members of the Emerson, Guarneri and Cavani Quartets, and has performed at numerous chamber music festivals, including Prussia Cove and Marlboro (with whom she has toured). She is cellist of Frequency and the Manhattan Piano Trio, and founding member and co-Artistic Director of the acclaimed New York-based chamber ensemble Decoda.

Along with masterpieces of the 18th, 19th and 20th centuries, Thorsteinsdóttir is inspired by music of our time and enjoys collaborating with living composers. In addition to working with Daníel Bjarnason on his award-winning composition “Bow to String”, she has premiered dozens of works, including pieces by Peter Schikele, Paul Schoenfield, Kendall Briggs and Jane Antonia Cornish.

Thorsteinsdóttir has garnered top prizes in international competitions, including the Naumburg Competition in New York and the Antonio Janigro Competition in Zagreb, Croatia. She received a Bachelor of Music from the Cleveland Institute of Music, a Master of Music from The Juilliard School and a Doctorate of Musical Arts from SUNY Stony Brook. Her principal teachers include Richard Aaron, Tanya L. Carey, Colin Carr and Joel Krosnick. Thorsteinsdóttir currently serves on the faculty of the University of Washington in Seattle, where she teaches cello and chamber music

Thorsteinsdóttir was a fellow of Ensemble ACJW—The Academy, a program of Carnegie Hall, The Juilliard School, and the Weill Music Institute in partnership with the New York City Department of Education—performing chamber music at Carnegie Hall and bringing classical music to New York City Public Schools.

Born in Reykjavik, Iceland, Thorsteinsdóttir moved to the states as a child—however, she still has family in Iceland and enjoys returning, both for concerts and family visits.