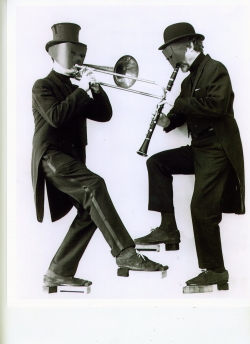 UW Music celebrates a half-century of collaborative music-making by two of its most-beloved faculty all-stars:  Stuart Dempster and William O. “Bill” Smith, turning 80 and 90, respectively, in 2016.

The trombonist Stuart Dempster and composer William O. Smith forged their friendship in the late 1960s when both were young professors at the School of Music and key members of the school’s Contemporary Group, a Rockefeller Foundation-supported ensemble that achieved national acclaim under the directorship of composer William Bergsma. In this commemmorative performance, the professors emiriti revisit work of the past half-century while demonstrating the improvisational talents that made them both central figures in an exceptionally rich creative period in the history of the School of Music, as well as professional composer/musicians of international renown.

The program of original works and improvisations includes Smith’s Antiphony and Encounter and Dempster’s Didjeridervish, as well as Robert Erickson’s General Speech for solo trombone (commissioned by Dempster in 1969).

Encounter (1970) by William O. Smith that features a trombone-playing lion and a foxy clarinetist in a video from ca. 1996.