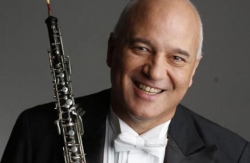 Alex Klein, principal oboist of the Chicago Symphony, leads a master class at the UW on Nov. 16 (Photo: courtesy the artist).

Principal oboist of the Chicago Symphony leads a master class with students of Mary Lynch.  He also performs brief works for piano and oboe and discusses performance health issues in this wide-ranging presentation.

Alex Klein (born 1964, Porto Alegre) is an oboist who began his musical studies in his native Brazil at the age of nine, and made his solo orchestral debut the following year. At the age of eleven he was invited to join the Camerata Antigua, one of Brazil's foremost chamber ensembles. During his teenage years he toured and performed as a soloist, recitalist and as a member of several professional orchestras in Brazil.[citation needed] He then studied at the Oberlin Conservatory of Music with James Caldwell, earning a BM and an artist diploma in music performance.

After a year at Oberlin he won first prize in the first Lucarelli International Competition for Solo Oboe Players held in Carnegie Hall. He has received many awards worldwide including at the 1988 International Competition for Musical Performers Geneva International Music Competition in Geneva, Switzerland. There he was the first oboist to be awarded the first prize since Heinz Holliger 29 years earlier. From 1992 to 1994 he was Assistant Professor of Music, with specialty in oboe and chamber music at the University of Washington in Seattle, Washington, where he performed with the Soni Ventorum Wind Quintet.

Klein won the 2002 Grammy Award for Best Instrumental soloist with Orchestra for his recording of Richard Strauss' Oboe Concerto with Daniel Barenboim and the Chicago Symphony.

Klein left the Chicago Symphony in July 2004 due to musician's focal dystonia which had begun within two years of his assuming the first chair; during a tour of the Far East with the orchestra. He currently performs as soloist and conductor, often with leading orchestras. He served as a Professor of Oboe at his alma mater, the Oberlin Conservatory. He is also artistic Director of FEMUSC (Santa Catarina Music Festival, Brazil), participant in the Sunflower Music Festival in Topeka, Kansas, USA, and conductor of the Saint Barths Music Festival (in the French Antilles).

In June 2016, he was once again appointed principal oboe of the Chicago Symphony.