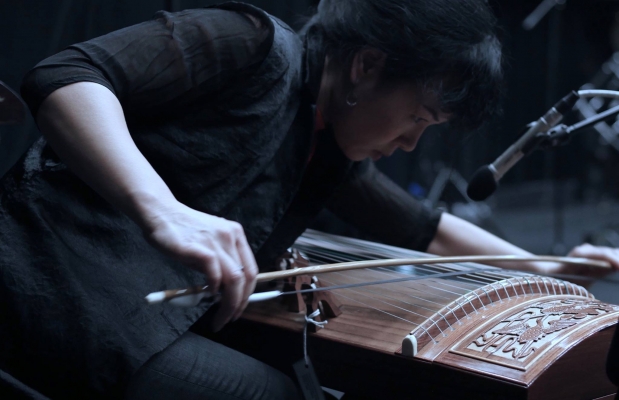 Master musician Nguyễn Thanh Thủy performs with Indigo Mist at the Jones Playhouse on Nov 17 (photo: courtesy of the artist).

Richard Karpen is a composer and researcher in multiple areas music and the arts. His compositions for both electronic media and live performance are widely known, recorded, and performed internationally. Over the last 30 years he has also been one of the leading pioneers in the development of computer applications for music composition, interactive performance, and sonic arts. He has recently returned to the stage as a pianist.

uan Pampin is Associate Professor of Music Composition at University of Washington and founding faculty member of the Center for Digital Arts and Experimental Media (DXARTS) for which he currently serves as Director. He received an MA in Composition from Conservatoire National Supérieur de Musique de Lyon, France and a DMA in Composition from Stanford University, where he studied with composer Jonathan Harvey.

His works explore the concepts of site, memory, and materiality using algorithmic strategies to produce aural phenomena. Pampin considers listening an active process of self reflexion, his sound installations consist of site-specific and interactive sonic environments, with locations ranging from bathrooms to urban public spaces. Pampin's music compositions, including works for instrumental, digital, and mixed media, have been performed around the world by world-class soloists and ensembles. His work "On Space" –for percussion sextet and 3D electronic sounds– has been recently released on CD as part of Les Percussions de Strasbourg 50th anniversary historical edition box. As a researcher, Pampin has developed new techniques for sound processing and spatialization, including the ATS software for spectral modeling and the Ambisonics Toolkit library (ATK, developed in collaboraation with Joseph Anderson). His recently patented Moving Ultra-Sound Technology (MUST) will be installed publicly for the first time as part of the Sanctum project.

As a youngster, Cuong's intense dedication and love for music led him to a full scholarship at the New England Conservatory of Music where he received his Bachelor of Music in Jazz studies with a distinction in performance. Transitioning from his studies in Boston, he moved to New York in 1994 and began his career actively leading various groups while touring extensively throughout the world. As a leader, Cuong has released five recordings, each making critics’ lists of the 10 best recordings of their respective years. Each record displays how he has carved out a distinctive sonic territory on the trumpet while blurring all stylistic borders while developing his own compositional aesthetic.

Stomu Takeishi has played electric fretless bass in a variety of jazz settings throughout the ’90s and 2000s. A member of Henry Threadgill’s Make a Move and Zooid, Myra Melford’s Crush Trio (with drummer Kenny Wollesen), and Erik Friedlander’s Topaz (with brother Satoshi Takeishi on percussion), Stomu Takeishi has also played in trumpeter Cuong Vu’s group Vu-Tet, and in the North Indian-influenced Alankar. Takeishi performs on Satoko Fujii’s album, South Wind, and has played with such musicians as Henry Threadgill, Don Cherry, Randy Brecker, and Wynton Marsalis. Takeishi has toured internationally with these various groups, from N.Y.C. to Finland’s Tampere Festival.

Nguyễn Thanh Thủy was born into a theatre family and was raised with traditional Vietnamese music from an early age in Hà Nội. She studied at the Hanoi Conservatory of Music where she received her diploma in 1998, followed by a Master of Arts at the Institute of Cultural Studies in 2002. Since 2000 she holds a teaching position at the Vietnam National Academy of Music. She has toured in Asia, Europe, the USA. She has received many distinctions, in 1992 First Prize in the Contest of Traditional Instrument Performance on Television and Radio, Vietnam, as well as in 1998 First Prize and the Best Traditional Music Performer Prize in the National Competition of Zither Talents, 1998, Vietnam. Nguyễn Thanh Thủy has recorded several CD’s as soloist with orchestra and solo CDs: Độc tấu đàn tranh Nguyễn Thanh Thủy Vol.1 (Solo dan tranh Nguyen Thanh Thuy Vol.1) – 2005, Tranh Improvisation (with Jakob Riis, laptop). Suối Tranh, (2012) (Nguyen Thanh Thuy Vol.2) and The Six Tones: Signal in Noise (2013) on dB Productions, Sweden. In 2013 she  published a book chapter in an edited book on Cambridge Scholars Publishing, and live recordings and a book chapter in (re)thinking improvisation: artistic explorations and conceptual writing, (a box with two CDs, a DVD and a book, published by Lund University Press.) In 2014 she published a book chapter on cross-cultural musical learning in “Spår av Musik”, a book edited by Stefan Östersjö on Lund University Press.

She works with both traditional and experimental music as a đàn tranh performer/improvisor; collaborates with many musicians and composers around the world. Between 2009 and 2011, she was involved as artistic researcher in the international research project (re)thinking improvisation, as a collaboration between the Vietnam National Academy of Music and the Malmö Academy of Music. Since 2012 she is carrying out an artistic doctoral project at the Malmö Academy of Music concerned with gesture in traditional Vietnamese music.
People Involved:
Richard Karpen
Cuong Vu
Juan Pampin
Ted Poor
Event Type:
Related Areas of Study:
Composition
Information for
Prospective
Students
Information for
Current
Students