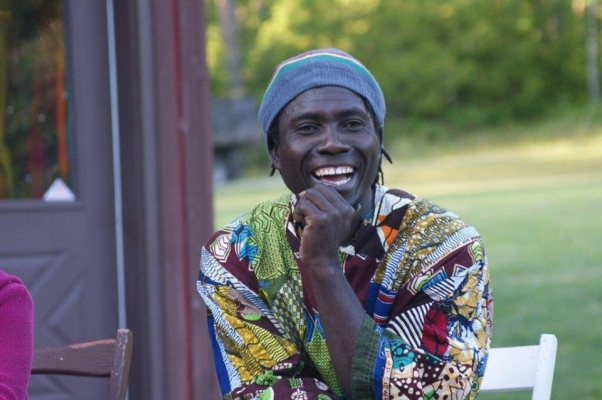 Spring Quarter Visiting Artist Manimou Camara, master drummer and founder of Seattle-based percussion and dance company Dounia Djembe, performs with his students in this concert of music and dance of Guinea, West Africa.

PROGRAM
Konkoba (with Denbaya)
This music and dance is from the Malinké people of Upper Guinea. It is named for a farmer called Konko with unusual strength and size (the word “ba” means “big”). In the village, the music is typically performed by a small ensemble and is meant to energize farmers.

Kassa (with UW Music students)
Like Konkoba, Kassa began as farming music from the Malinké people. The version played tonight is one of many that exist for distinct phases of the farming process in the Hamanah region of Upper Guinea.

Fula Faré (with Denbaya)
This music is typically played for general celebrations, including baptisms and weddings, among the Peuhl ethnic group. The Peuhl refer to it as “Toumbouseysy” or “Yolele.” It is now more commonly known by the Sosoxui (Susu language) name “Fula Faré”, which translates to dance of the Peuhl.

Balani (with UW students)
Originating in the far northeast of Guinea, this is a mask dance for Malinké youth between 18-25 years old. It is comedic and works as an energizing introduction to the ceremony of another mask, Kondenabu

Sorsornet (with Denbaya)
Once sacred and secret music accompanying spiritual food sacrifices among people of the Baga ethnic group in Coastal Guinea, Sorsornet has become popular music and dance in many contexts. This arrangement begins with a Kassa song.

Yamama/Sinté (with Denbaya and UW music students)
Yamama, which makes up the beginning and end of this medley, is a rhythm of the Susu people from the Guinean village of Samu, near the border with Sierra Leone. Sinté forms the core of the piece, and is from the Landuma and Nalu people in the Boké region of northwest Guinea. It is danced for wedding celebrations, and is sometimes called “Kumbila Faré.”

Ti n k a n g n y i  (with Denbaya)
The title of this song means “learning,” and the lyrics include passages dedicated to the performers’ teachers. A variety of traditional instruments accompany the singing, including balafon, flute, gongoma, and bolon.

Daba (with Denbaya)
This dance mixes traditional and contemporary styles in a fusion inspired by the movements of harvesters.

Krin (with UW music students and Denbaya)
The krin is a log drum from the Forest Region of Guinea. Similar instruments have historically been used to communicate over distance or imitate speech patterns in many cultural traditions across sub-Saharan West Africa. This arrangement includes Leela from the Forest Region and Zaowli from the bordering Ivory Coast.

Santa Maria (with Denbaya)
This is an original arrangement of contemporary djembe and dunun music, first created following interactions between musicians from Guinea and Cuba.

Dundunba (with Denbaya)
Dundunba is from the Hamanah region of Upper Guinea, and is known as the dance of the strong men. With rural historical roots in generational status promotion as well as theatrical displays of resistance to French colonial control, Dundunba is arguably the most popular drum and dance style in Guinea. Musicians and dancers have developed dozens of variants of Dundunba, and this arrangement features Denmusoni Kelen, Gbada, and Bolokonondo.

Manimou Camara grew up in the Gbessia neighborhood of Conakry, the capital of the Republic of Guinea. Manimou's primary djembe education was spent with Sekou Dico Sylla. Manimou performed with many of Guinea's most prestigious artists and performance groups, including Ballet Saamato, Kemoko Sano’s Merveille de Guinee, Baga Percussion, Karamoko Daman, and Bolokada Conde. He is featured on the 1999 album Méthode de Djembé with Karamoko Daman, Yaka Soumah and Yves Bangoura.

In 2000-2003, he participated in several national performance contests, taking first place at the French-Guinean Cultural Center, at Palais du Peuple, in Friguiabé, and in Kindia. With Manimou playing lead dunduns, Ballet Saamato took third place in 2006 and first place in 2007 at the prestigious National Festival de Percussion and Danse. He has been involved in several drumming and dance workshops in Guinea for tourists from France, Germany, England, Scotland, Belgium, Japan, Italy and the United States.

Manimou now lives in the Seattle area with his wife Jessica, daughters Rosaline and Elia, and son Gnakoe. Manimou performs and teaches weekly classes in Seattle, and travels to share his culture across the west coast of the United States and Canada. He and his wife Jessica have organized the annual Camp Saamato, bringing Guinean artists living across North America to the Pacific Northwest for a weekend-long conference of music and dance classes.