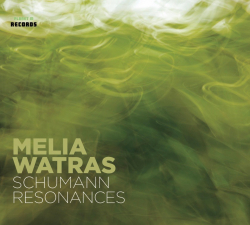 The event is free and open to the public.
Free Schumann Resonances CDs will be given out to the first 50 guests.

Violinist Michael Jinsoo Lim has been praised for playing with “delicious abandon” by Gramophone, described as “bewitching” and “masterful” by the Seattle Times, and hailed by the Los Angeles Times as a “conspicuously accomplished champion of contemporary music.” He is concertmaster and solo violinist of the Pacific Northwest Ballet Orchestra (“surely the best ballet band in America”—New York Times) and serves as artistic director and violinist of the Seattle-based ensemble Frequency.

Recent highlights include the world premiere of Andrew Waggoner’s Violin Concerto, appearances as soloist for the Stravinsky Violin Concerto at New York’s City Center (as part of Pacific Northwest Ballet’s 2016 NYC tour), and performances of concertos by Prokofiev and Stravinsky with PNB during the 2016-17 season. Lim will travel with the company in the summer of 2018 to perform Prokofiev’s Violin Concerto No. 1 in Paris.

For twenty years, Lim toured and recorded with the Corigliano Quartet, a group he co-founded. With the quartet, he won the Grand Prize at the Fischoff Chamber Music Competition and the ASCAP/CMA Award for Adventurous Programming, and performed in the nation’s leading music centers, including Carnegie Hall, Weill Recital Hall, and the Kennedy Center. The quartet’s Naxos label CD was honored as one of The New Yorker’s Ten Best Classical Recordings of the Year.

Lim attended Indiana University, where he was a pupil of the legendary Josef Gingold. He later studied chamber music at the Juilliard School and taught there as an assistant to the Juilliard String Quartet. He currently serves on the faculty of Cornish College of the Arts. Lim has recorded for Naxos, Sono Luminus, DreamWorks, Albany, Bridge, CRI, Bayer Records, RIAX and New Focus, and has been heard on NPR programs such as Performance Today and All Things Considered.

Melia Watras has been hailed by Gramophone as “an artist of commanding and poetic personality” and by The Strad as “staggeringly virtuosic.” As a violist, composer and collaborative artist, she has sustained a distinguished career as a creator and facilitator of new music and art. Among the highlights of the 2021-22 season are the release of her eighth album, String Masks, a collection of her own compositions including the titular work which utilizes Harry Partch instruments; world premiere performances of works that she recently commissioned from Alessandra Barrett, Joël-François Durand and Anne Leilehua Lanzilotti; and a number of world premieres as a composer, including her settings of poetry by Herbert Woodward Martin.

Watras’s discography has received considerable attention from the press and the public. Her compositional debut album, Firefly Songs, was hailed for “distilling rich life experiences into strikingly original musical form” by Textura. Schumann Resonances was described by the American Record Guide as “a rare balance of emotional strength and technical delicacy.” The Strad called 26 “a beautiful celebration of 21st century viola music.” Ispirare made numerous Best of 2015 lists, including the Chicago Reader’s (“Watras knocked the wind out of me with the dramatically dark beauty of this recording”). Short Stories was a Seattle Times Critics’ Pick, with the newspaper marveling at her “velocity that seems beyond the reach of human fingers.” Of her debut solo CD (Viola Solo), Strings praised her “stunning virtuosic talent” and called her second release (Prestidigitation) “astounding and both challenging and addictive to listen to.”

Watras’s compositions have been performed in New York City, Chicago, Seattle, Bloomington (IN), Denmark and Spain. She has been commissioned by the Avalon String Quartet, violinists Rachel Lee Priday and Michael Jinsoo Lim, cellist Sæunn Thorsteinsdóttir, pianist Cristina Valdés, violist Rose Wollman, and has had works performed by artists such as violist Atar Arad, singer Galia Arad, pianist Winston Choi, Harry Partch Instrumentarium Director Charles Corey, violinists Manuel Guillén and Yura Lee, percussionist Bonnie Whiting and the ensemble Frequency. Her music has been heard on National Public Radio’s Performance Today, and can be found on the albums String Masks, Firefly Songs, Schumann Resonances and 26. Watras’s adaptation of John Corigliano’s Fancy on a Bach Air for viola is published by G. Schirmer, Inc. and can be heard on her Viola Solo album.

Watras is violist of Frequency, and for twenty years, she concertized worldwide and recorded extensively as violist of the renowned Corigliano Quartet, which she co-founded. The quartet appears on 13 albums, including their recording on the Naxos label, which was honored as one of the Ten Best Classical Recordings of the Year by The New Yorker.

A versatile performer, Watras has enjoyed collaborations with dance and theater. She appeared as violist/dancer in the premiere of Kathryn Sullivan's At Home, at the Merce Cunningham Studio in New York City. Music from her album Viola Solo was featured in director Sheila Daniels’s production of Crime and Punishment at Intiman Theatre, and she worked as music consultant for Braden Abraham’s production of Opus at Seattle Repertory Theatre.

Melia Watras studied with Atar Arad at Indiana University, earning Bachelor’s and Master’s degrees and the prestigious Performer’s Certificate. While at Indiana, Watras began her teaching career as Professor Arad’s Associate Instructor, and was a member of the faculty as a Visiting Lecturer. She went on to study chamber music at the Juilliard School while serving as a teaching assistant to the Juilliard String Quartet. Watras serves as Professor of Viola at the University of Washington, where she holds the Adelaide D. Currie Cole Endowed Professorship and was previously awarded the Donald E. Petersen Endowed Fellowship and the Royalty Research Fund. Watras has given viola and chamber music classes at schools such as Indiana University, Cleveland Institute of Music, Strasbourg Conservatoire (France), and Chosun University (South Korea). She frequently returns to her alma mater, Indiana, to teach as a guest professor. She plays a viola made by Samuel Zygmuntowicz.