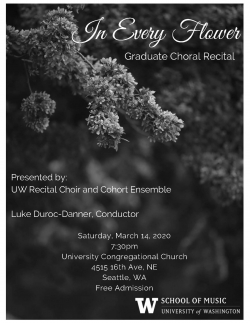 This performance has been cancelled.

Luke Duroc-Danner is a conductor, singer, pianist, and organist. He holds a B.A. in Music from the University of Chicago where his thesis on Mendelssohn’s Elijah was awarded honors by the music faculty. Luke has appeared as the emerging artist with The Strangers Ensemble and as a guest conductor and organist at First United Methodist Church at the Chicago Temple. As a pianist, he has appeared as both a soloist and a collaborative pianist – most notably in a performance at the Library of Congress while a Junior Fellow. He has sung with the University of Chicago’s Motet Choir, the Chicago Chorale, and the Apollo Chorus. During his undergraduate career, he studied conducting with James Kallembach at the University of Chicago and John Yarrington at Houston Baptist University. He has also attended several conducting institutes at both Westminster Choir College and St. Stephen's House at Oxford University.