Student and Alumni Notes for Winter/Spring 2012-13 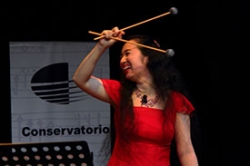 Our students and alumni land great opportunities nationally and internationally--beyond the walls of the School of Music.

A 17-day teaching and performance trip to Lima, Peru challenged Memmi Ochi, (DMA candidate, Percussion Performance), to apply her UW music education on the stage and in the classroom to a most intense degree. Ochi, a student of Tom Collier and Michael Crusoe, traveled to Lima in February as one of six international artists invited to Vibraciones, an international marimba and vibraphone festival hosted by Alonso Acosta, a professor at the National Conservatory of Music in Lima, and Instituto Cultural Peruano Norteamericano (ICPNA). During the five days of the festival, she gave a solo recital, performed a duet with a faculty member from the National Conservatory during the headlining concert, taught a master class, gave a clinic, and conducted the festival ensemble during the festival's final gala concert. When the festival concluded, she remained in Lima for a few more days for another series of concerts at several Japanese and Japanese-Peruvian organizations. She performed a solo recital at the Japanese/Peruvian Cultural Center, a short concert for Japanese Peruvian Senior Citizens, and a 110-minute educational concert for school children in grades one through nine at Asociacion “Academia de Cultura Japonesa.” She concluded her trip by returning to the National Conservatory to teach private lessons and lead a four-hour master class. “The 17-day trip was full of surprises,” Ochi says. “It was sheer joy to be there and to be able to put everything I learned, from performing to teaching, to the highest possible degree. It was such an amazing experience, and it still gives me chills just to think about it now.” Ochi so impressed the faculty at the National Conservatory that she has been invited back for the school’s percussion festival in August, 2014.

UW Wind Ensemble teaching assistant Erin Bodnar (DMA candidate, Instrumental Conducting) has accepted a position as conductor of the Wind Symphony at Mahidol University in Bangkok, Thailand, where she also will teach undergraduate conducting and initiate the graduate conducting program for MM and DMA students. Her new appointment is effective in June. “Mahidol has a terrific music school with over 1,000 majors and 122 faculty,” says Tim Salzman, Bodnar’s conducting professor. “The wind ensemble and band scene in Thailand has exploded over the past two decades. I've adjudicated bands there and they rival the finest ensembles I've heard anywhere. Congratulations to Erin and thank you, colleagues, for mentoring her during her time at the UW.”

Another of Professor Salzlman’s recent students, Gary Brattin ('12 DMA, Instrumental Conducting), recently accepted a tenure-track position as Assistant Director of Bands/Tuba-Euphonium teacher at the University of Central Missouri. With Brattin’s and Bodnar’s recent appointments, 17 of Salzman’s conducting students have now obtained positions in colleges and universities around the country, including such schools as Indiana University, University of Illinois, and Florida State University.

Jeremy Briggs Roberts (’04 DMA, Instrumental Conducting), who is now music director of the Washington Idaho Symphony in Pullman, received the sort of patron support every arts organization dreams of in February when community benefactors Ed and Beatriz Schweitzer made a major multi-year gift to the symphony to help fund two seasons of programming, facilitate a venue change and special performances—including opera and ballet—and provide support for orchestra and staff. “The Schweitzer’s incredible support represents a transformative event in our arts community,” Briggs Roberts said in announcing the gift, “and shows to the outside world our area’s deep and profound commitment to a vibrant artistic and cultural environment.”

Choral conducting student Johann Van Niekerk has been accepted to study Lithuanian at Vilnius University in August 2013 for two weeks of language study followed by one week of touring and cultural exchange. He also has received funding from the Rotalia Foundation to conduct research in Estonia and Latvia in July 2013. The opportunities are a perfect complement to Van Niekerk’s studies at the UW, where he is pursuing a cognate in Baltic Studies in addition to the DMA in choral conducting. The Baltic Studies cognate includes extensive language studies in the three Baltic languages, history courses, and participation in Baltic events and symposia, as well as an upcoming performance and research tour to Estonia, Latvia, and Lithuania in the Summer of 2013 (including performances with the UW Baltic Tour Choir). A native of South Africa, Van Niekerk is active in Seattle’s musical community, serving as music director at Rainier Beach Presbyterian Church and as a pre-doctoral teaching associate at the UW’s Tacoma campus (where he designed and implemented a new choral/music program in 2012).