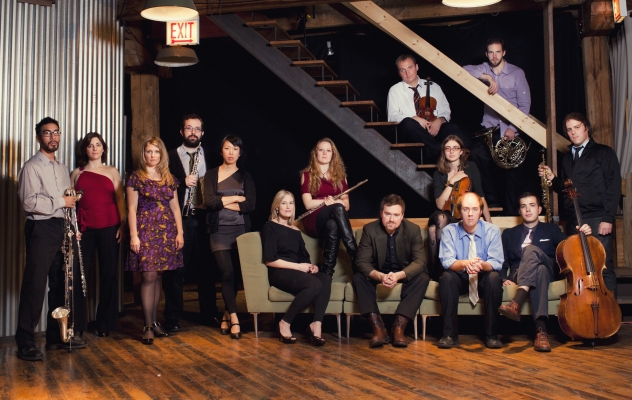 The Chicago-based Ensemble Dal Niente collaborates with UW composers during its October residency at the School of Music (Photo courtesy Dal Niente).

The 21-member Chicago-based Ensemble Dal Niente claims “some of the best new-music virtuosos around,” says the Chicago Tribune, which promises "bracing sonic adventures” when this new music collective comes to town. The group will explore, collaborate, and perform during its weeklong residency at the School of Music, concluding with an Oct. 30 concert of works by UW faculty composers Joël-François Durand and Huck Hodge and doctoral student Marcin Pączkowski.

“Ensemble Dal Niente looks forward to collaborating with one of the Pacific Northwest’s leading centers for new music, The University of Washington,” the group announced recently. “Throughout this residency, Dal Niente will perform significant works for ensemble by faculty members Joel Durand and Huck Hodge, tackle a visceral duo for oboe and percussion by the iconic composer Iannis Xenakis, improvise with live electronics, and work closely with graduate composition students through workshops and the performance of new works.”

The program for the group’s Meany Theater performance includes Durand’s Un feu distinct for flute, clarinet, piano, violin, and cello, a work originally commissioned by the Ensemble Contrechamps and premiered in Geneva in 1992; and Hodge’s Apophenia, commissioned by the Ernst von Siemens Musikstiftung and the Barlow Endowment and premiered by the Divertimento Ensemble in 2014.

Also on the program is Deep Decline, a new interactive work by Marcin Pączkowski, a graduate of the UW composition program who studies with Juan Pampin at the Center for Digital Arts and Experimental Media.

"This piece is a continuation in my research on using accelerometers for musical performance, as well as computer-assisted composition," Pączkowski wrote recently in correspondence describing the new work. "It incorporates improvisation elements, as well as generative algorithmic writing, while live electronics transformations extend the sound of the instruments."

Scored for flute, oboe, clarinet, percussion, piano, violin and cello, Deep Decline involves the use of motion sensors worn by the performers, which the composer says will enable "direct control of the computer-transformed sounds."