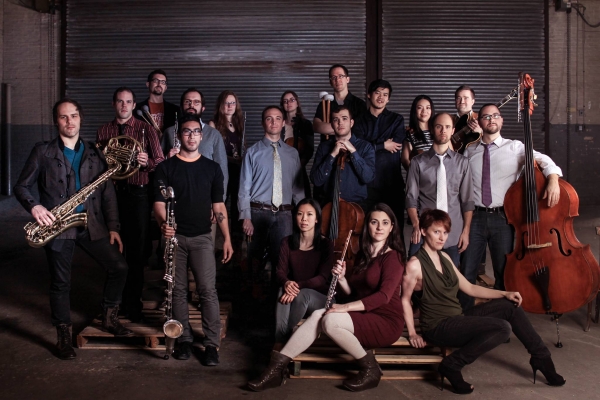 for flute, oboe and clarinet

for oboe and percussion

Marcin Pączkowski (b. Kraków, Poland) is a composer, conductor, and performer, working with traditional and electronic media.  He received his Masters’ degrees from the Academy of Music in Kraków, Poland, where he studied with Wojciech Widłak (composition) and Rafał Delekta (conducting), and from University of Washington in Seattle, Washington, where he studied composition and computer music with Juan Pampin and Richard Karpen.  Currently he is a doctoral student in the Center for Digital Arts And Experimental Media (DXARTS), where he studies with Juan Pampin.

His current research is focused on exploring ways of engaging computer media in improvisation, as well as motion tracking and machine learning techniques used for creating and controlling musical structures.

As the conductor and performer he is involved in performances of new music.  His compositions were performed on many composers workshops and concerts in Poland and United States.  In 2010 he was awarded 2nd prize in the 18th edition of Adam Didur all-Polish Composers’ Competition.  During 2006-2007 he was a recipient of the scholarship for artistic achievement from Lesser Poland Scholarship Lesser Poland Scholarship Foundation Sapere Auso.

This piece is a continuation in my research on using accelerometers for musical performance, as well as computer-assisted composition.  It incorporates improvisation elements, as well as generative algorithmic writing, while live electronics transformations extend the sound of the instruments.

Franco Donatoni was an Italian composer.  Born in Verona, Donatoni started studying violin at the age of seven, and frequented the local Music Academy.  Later he studied at the Milan and Bologna Conservatories.

Donatoni died in Milan in 2000, wishing to work on his second book of the monumental "Arte della Fuga”, for large orchestra, based on the original work of Johann Sebastian Bach.

Iannis Xenakis was a Greek-French composer, music theorist, and architect-engineer.  After 1947, he fled Greece, becoming a naturalized citizen of France.  He is commonly recognized as one of the most important post-war avant-garde composers.  Xenakis pioneered the use of mathematical models in music such as applications of set theory, stochastic processes and game theory and was also an important influence on the development of electronic and computer music.  He integrated music with architecture, designing music for pre-existing spaces, and designing spaces to be integrated with specific music compositions and performances.

Among his most important works are Metastaseis (1953–54) for orchestra, which introduced independent parts for every musician of the orchestra; percussion works such as Psappha (1975) and Pléïades (1979); compositions that introduced spatialization by dispersing musicians among the audience, such as Terretektorh (1966); electronic works created using Xenakis's UPIC system; and the massive multimedia performances Xenakis called polytopes.  Among the numerous theoretical writings he authored, the book Formalized Music:  Thought and Mathematics in Composition (French edition 1963, English translation 1971) is regarded as one of his most important.  As an architect, Xenakis is primarily known for his early work under Le Corbusier:  the Sainte Marie de La Tourette, on which the two architects collaborated, and the Philips Pavilion at Expo 58, which Xenakis designed by himself.

Joël-François Durand (Orléans, France) is Professor of Music at the University of Washington, where he has taught composition, analysis, and theory since 1991.  He has been Associate Director of the UW School of Music since 2002.

Durand studied mathematics, music education, and piano in Paris, then composition with Brian Ferneyhough in Freiburg im Breisgau, Germany (1981-84).  During that time he also attended masterclasses with György Ligeti, Luciano Berio and Luigi Nono.  In 1982 Durand was awarded a scholarship from the DAAD (German Academic Exchange), and a Darmstadt Institute Scholarship for his String Trio.  In 1983 his piano compositon "…d'asiles déchirés …" received a prize at the Third International K. H. Stockhausen Composition Competition in Brescia (Italy).

He left Europe in 1984 to pursue a Ph.D. in Composition (awarded in 1988) at the University of New York, Stony Brook (USA), where he studied with Bülent Arel.  He also studied electronic music with Daria Semegen.  Durand was awarded scholarships from the Fulbright Foundation and from the French Ministry of Culture.  He received the "Kranichsteiner Musikpreis" from the Darmstadt Internationalen Ferienkurse in 1990.

Durand has composed for a wide variety of instrumental combinations.  His music has been commissioned and performed by many leading ensembles and orchestras in Europe, the US, Brazil, and South Korea, including Ensemble Intercontemporain, London Sinfonietta, Contrechamps, Arditti Quartet, ASKO, Nieuw Ensemble, Ensemble Köln, Recherche, musikFabrik, New York Philomusica, Counter)Induction, EarPlay, BBC Symphony Orchestra, Orchestre Philarmonique de Radio France, Deutsches Symphonie Orchester Berlin.  Durand's work for orchestra, Athanor, was premiered by the BBC Symphony Orchestra in 2003 and was released on a CD (Mode Records) of his music in 2004.  A book on his music, Joël-François Durand in the Mirror Land, edited by Jonathan W. Bernard, was released in 2006 by the University of Washington Press, in collaboration with Perspectives of New Music.  Durand is listed in the New Grove Dictionary of Music and Musicians.

The combination of instruments used in Un feu distinct (flute, clarinet, piano, violin and cello) has become somewhat of a standard one in the 20th century, almost exclusively because of the impetus given to it by Schoenberg in his Pierrot Lunaire (to which he added a voice part).  Remarkably enough, it was not until the early 20th century that a small group of mixed winds, strings, and piano combination could become such a common and familiar medium for composers.

The sound of this light and colorful combination of instruments was certainly a big factor in a number of compositional decisions I made when I set about writing this work.  Compared to a more traditional instrumental formation, the string quartet, there are more instrumental colors available with two winds and two strings—with or without piano—than just four strings alone, therefore also more possibilities of different characters.  But what attracted me most in this group of four instruments, to leave the piano aside for a moment, was the fact that the polyphony, the superimposition of independent lines, could gain an immediate clarity because of the large differences in timbres between the instruments:  the flute and the clarinet could be easy to distinguish in most situations when they would sing different lines together, and the violin and cello, although both string instruments, are far enough in register to afford complete aural separation if needed.

In fact, one could say that with two wind instruments and only two strings, one enters a world of difference rather than of similarities.  So this basic difference in timbral colors helped me imagine individual melodic lines for each instrument which could be somewhat independent from each other.  The musical result calls for a particular kind of listening, because the attention is constantly drawn to several lines at the same time, and has to fight, so to speak, in order to decide which one(s) to listen to at any given moment.  Here, listening is not so much a matter of hearing every detail at every moment, but to let the ear travel constantly between the detail, as much as it is perceptible, and the whole, the global sound of a moment.  Similarly, the perception of the whole piece, of its form, is not about following a particular theme, or a series of themes, but to realize how particular and specific atmospheres, musical characters of entire passages evolve and return, modified in density or speed, at times sparse and delicate, at other times dense and energetic, and experience them as moments of a journey rather than a construction where one is supposed to follow mentally how all the pieces fit together.

Thus, in the first section of the piece, for example, the trio piccolo-clarinet-violin forms a compound sound, where the various lines in each instrument come in and out of phase with each other, creating a certain aural confusion.  Under that complex line, the cello offers a counterpoint in a totally different character.  Added to that was the role of the piano, which I decided to make almost into a soloist in a mini concerto setting.  This reinforced further the independence of the lines.  But it allowed me to imagine also situations where the piano is in dialogue with the other instruments, forming small duets or trios, as for example the two duets with piano/cello and piano/alto flute in the middle of the piece.

The long slow section that draws the piece to its end is quite exemplary in that respect, because each instrument seems to be singing long and different melodies at the same time, without any attempt to synthetize them in any way (except for the flute which is echoing the violin line).  In fact, this slow closing section is very much representative of an effort to bring all the differences—in melodic content, rhythms, instrumental colors—of the piece together by superimposition, in order to reinforce and affirm their differences, rather than force them in any kind of unitary synthesis: a kind of sound “democracy,” perhaps, where each voice can be heard without having to fight with the others, or impose itself over the others.

Huck Hodge writes music that explores the embodied poetics of organized sound, perceptual illusion and the threshold between design and intuition. A composer of “harmonically fresh work", "full of both sparkle and thunder” (New York Times), his music has been praised for its “immediate impact” (Chicago Tribune) and its ability to "conjure up worlds of musical magic” with “power and charisma" (Gramophone Magazine, London).

Uniquely Northwestern light patterns act as an inspiration in much of his music — the way that a piercing slant of light, breaking through a dreary Seattle cloudscape, casts an intense, otherworldly chiaroscuro on the landscape—the ethereal yellowness of the light in bas-relief against the yawning darkness of the sky.  These stark contrasts in light and dark find their way into his striking combination of pure and dissonant harmonies, widely spaced orchestrations and vast, diffuse timbres.  His music has been premiered, performed and recorded worldwide by members of Ensemble Modern and the Berlin Philharmonic, the Seattle Symphony, the ASKO/Schönberg Ensemble, the Talea Ensemble, the JACK Quartet and numerous other ensembles and soloists.  Upcoming engagements include an appearance at the New York Philharmonic Biennial and the premiere of a new string quartet commissioned by the Fromm Foundation at Harvard University.  Hodge is currently Associate Professor of Composition at the University of Washington.

Apophenia was commissioned by the Ernst von Siemens Musikstiftung and the Barlow Endowment for the 2014 Rondò Festival in Milan, Italy. The premiere was given by the Divertimento Ensemble under the direction of Sandro Gorli at the Teatro Franco Parenti on May 7th, 2014.

Apophenia can be defined as the "unmotivated seeing of connections" accompanied by a "specific experience of an abnormal meaningfulness", but it has come to represent the human tendency to seek patterns in random or incongruous information.  Drawing on the work of C. G. Jung, this piece explores the malleability of time and the ways that meaning may be constituted through the apparent convergence of causally unrelated events.  Originally written in collaboration with Italian choreographer Ariella Vidach, the piece is meant to create the effect of an important and meaningful ritual, the actual meaning of which is completely obscure — as though from an alien religion.