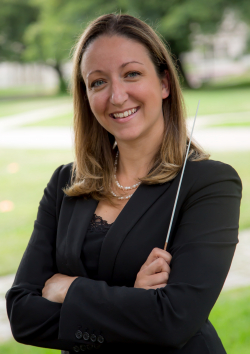 School of Music students and alumni report awards, publications, promotions, and summer travels among recent activities on campus and around the world.

School of Music students and alumni were among top prize winners of the 2017-18 American Prize, announced recently by the nonprofit Hat City Music Theater in Danbury Connecticut.

Shayna Stahl, DMA student in the Wind Conducting program, was first-place winner in the Conducting, Community Band Wind Band/Wind Ensemble Division for her work with the UW Concert Band.

Anna Edwards (’14 DMA, Orchestral Conducting) took first place in both the conducting and orchestral performance categories of the community orchestra division for her work with the Seattle Collaborative Orchestra.

Choral Conducting alums Wendy Moy and Jeremiah Selvey shared a second-place award and special judge’s citation in the Choruses category for their “extraordinary commitment to new music” in their work as co-directors of Chorosynthesis Singers.

In other news, current student percussionist Ed Cunneen (MM, Percussion) traveled to the Splice Festival in Michigan over the summer, collaborating on new electroacoustic works with resident composers and honing his own skills as a performer who uses live electronics. Percussionist Lynn Park (BM, Percussion) spent the summer in Korea exploring traditional Korean music.

Doug Morin (ABD, Wind Conducting) has accepted an appointment as Associate Director of Bands at Illinois State University. Morin served for the past three years as a teaching assistant in the athletic band program at the UW while working towards the completion of his doctoral degree in wind conducting.

Gabriela Garza Canales (DMA, Orchestral Conducting) appeared as guest conductor with the Albuquerque Philharmonic Orchestra in New Mexico this past summer, and with the Universidad Autónoma de Nuevo León Philharmonic Orchestra (UANL) in Monterrey, Mexico. At UANL, she led two masterclasses on conducting. Gabriela and her colleague Mario Torres also led the UW Summer Orchestra in a concert of music by Beethoven, Mozart and Bartók.

Mario Alejandro Torres (DMA, Orchestral Conducting) was recently named music director and conductor of the Bainbridge Symphony Orchestra. He continues also his role as conductor for Poulsbo Community Orchestra. As co-conductor of the UW Campus Philharmonia, he organized and led a Side-by-Side performance with the Bellevue Youth Symphony in Meany hall in May, 2018.

Lorenzo Guggenheim (’18 MM, Orchestral Conducting) is continuing his studies in the DMA program at the University of Toronto, where he recently formed The University of Toronto Campus Philharmonic Orchestra, a campus-wide orchestra for non-music majors, faculty, staff and community members. He also has been invited to appear as guest conductor this fall with the Orquesta Sinfonica Municipal de Mar del Plata in his native Argentina.

Abbie Naze (’17 MM, Orchestral Conducting) continues to serve as adjunct professor and orchestra director at Pierce College and has been appointed director of music and liturgy at Our Lady of the Lake Parish in Seattle.

Tigran Arakelyan (’16 DMA, Orchestral Conducting) has recently been named Music Director of the Bremerton Youth Symphony, adding to his lineup of ensemble involvement: he also serves as Music Director of the Bainbridge Island Youth Orchestras, the Federal Way Youth Symphony, Port Townsend Community Orchestra, and the Northwest Mahler Festival. This past summer Arakelyan was interviewed on Public Radio of Armenia, won the Bronze Medal at the Global Music Awards for his work on his podcast “Off The Podium”, and was awarded third place in the American Prize for Orchestral Programming for his concerts with the Bainbridge Island Youth Orchestras. In January 2019, he appears as guest conductor with the Juneau Symphony.

Choral Conducting alumna Wendy Moy (DMA, Choral Conducting) has been appointed director of The Eastern Connecticut Symphony Chorus. Moy is the director of choral activities and music education at Connecticut College and the co-artistic director, with UW alumnus Jeremiah Selvey (DMA, Choral Conducting), of Chorosynthesis Singers, a 12-voice professional project-based chamber ensemble. Moy recently made her conducting debuts in Brazil and China and was named a Fellow in the American Choral Directors Association (ACDA) International Conductors Exchange Program. She and Selvey, who is Director of Choral Activities and Professor of Vocal Music at Santa Monica College in Santa Monica, California, received a second place and judge’s citation in the Choruses division of the 2017-18 American Prize.