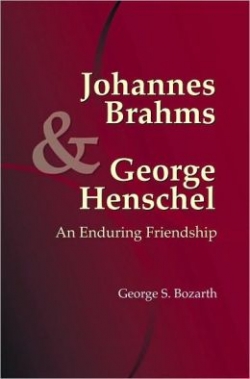 George Henschel (1850-1934) was one of the finest singers of his day.  Born in Breslau of Polish-Jewish parents, he studied in Berlin and became a favorite of the Joachims and Clara Schumann.  Extremely popular for his dramatic vocal style and for accompanying himself, he toured Europe and American performing duet recitals with his wife Lillian.  Henschel also built a reputation as a conductor: he served as the first music director of the Boston Symphony Orchestra, founded the London Symphony Concerts, and led the Scottish Orchestra in Glasgow.  He succeeded Jenny Lind as Professor of Singing at the Royal College of Music, and in 1914 he was knighted.

Henschel met Johannes Brahms in May 1874 at the Lower Rhenish Musical Festival in Cologne, and their friendship endured until Brahms's death.  In the early years Brahms  hired Henschel to sing in oratorios in Vienna and accompanied him in recital.  During the summer of 1876 the two spent their vacation together on the island of Rügen, discussing musical issues as they shared a hammock stretched betwen two beech trees.  When Henschel accepted the leadership of the Boston Symphony Orchestra for three years, Brahms lamented his loss for Europe's musical life.  Throughout Henschel's stay in America, they maintained their correspondence, and during the summers after Henschel's return to England in 1884, they continued to correspond and to see one another.  Henschel was one of the torch bearers at Brahms's funeral in 1897.

Today George Henschel is best known for his highly informative little book Personal Recollections of Johannes Brahms (Boston, 1907), in which he published memoirs of his times with Brahms and a selection of Brahms's letters to him.  The present volume incorporates these recollections and letters (newly edited), and supplements them with letters from Henschel to Brahms, additional Brahms memoirs from other published and unpublished sources (including Brahms's reaction to Custer's "Last Stand"), Henschel's recollections of his contacts with Verdi and Wagner, a listing of Henschel's compositions, writings, and recordings, and extensive annotations that enlighten the reader on all of this material.  An Introduction and three additional chapters further elucidate the relationship of these two musicians.  A compact disc of Henschel's complete recordings for His Master's Voice and Columbia Graphophone accompanies the book.