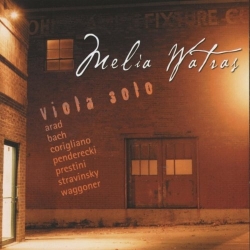 While reviewing the premiere recording of Atar Arad’s monumental Sonata played by its composer in January 2004, I wrote that that definitive performance would be ‘a hard act to follow’. Well, competition has arrived with this new recording by one of Arad’s former students, the excellent Melia Watras. She is completely inside the work’s wistful atmosphere, making it sound – as it should – as improvisations on half- remembered music. The microtonal bendings sound wholly convincing, too, and the short finale is staggeringly virtuosic.

I was less taken with Bach’s Chromatic Fantasia, here given in a revised text that seeks to eliminate the worse ‘tziganeries’ of Kodaly’s transcription and ends up being neither goulash nor sauerkraut. A founding member of the Corigliano Quartet, Watras might be expected to be attuned to that composer’s idiom, and indeed she catches the melancholic atmosphere of his Fancy on a Bach Air well, although the transposition of this cello piece brings much of it too high for aural comfort. Andrew Waggoner’s Collines parmi étoiles... lives up to its Messiaenesque title, conjuring vast vistas of sound. As in Arad’s Sonata, W atras’ s bell-clear harmonics are here much to the fore. Paola Prestini’s capricious solo Sympathique was written as part of a master’s degree at the Juilliard School; again, Watras is responsive to the fast-paced changes of mood. Stravinsky’s Élégie and Penderecki’s Cadenza belong to the viola’s central repertory, and both receive authoritative readings from Watras.

The recording is quite close, catching every nuance in Watras’s playing (she plays a warm- toned viola by Samuel Zygmuntowicz) as well as the odd sniff.