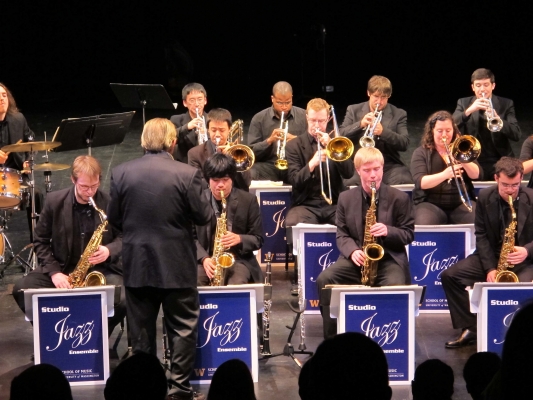 The Studio Jazz Ensemble, led by Fred Radke, performs selections from the Big Band repertoire, including “Straight Out,” and “Looking Through the Back Door,” plus an original work by the band’s own trombonist and vocalist, Kevin Jenson. The Modern Band, led by Cuong Vu, performs original music by band member Raymond Larsen, trumpet, including a large-scale composition, “New Studies of the Starry Skies,” and a setting of three poems by Emily Dickinson.

A recipient of numerous awards and honors, Cuong was awarded the Colbert Award for Excellence: The Downtown Arts Project Emerging Artist Award. As an assistant professor in jazz studies, he was recently awarded the University of Washington's prestigious Distinguished Teacher Award and is a Donald E. Petersen Endowed Fellow. In 2002 and 2006, Cuong was a recipient of the Grammy for Best Contemporary Jazz Album as a member of the Pat Metheny Group. He's been recognized as one of the top 50 young Jazz Artists in an article called "The New Masters" from the British magazine, "Classic CD" and in 2006 was named the Best International Jazz Artist by the Italian Jazz Critics' Society. Amazon listed Vu's "Come Play With Me" on their "The 100 Greatest Jazz Albums of All Time".