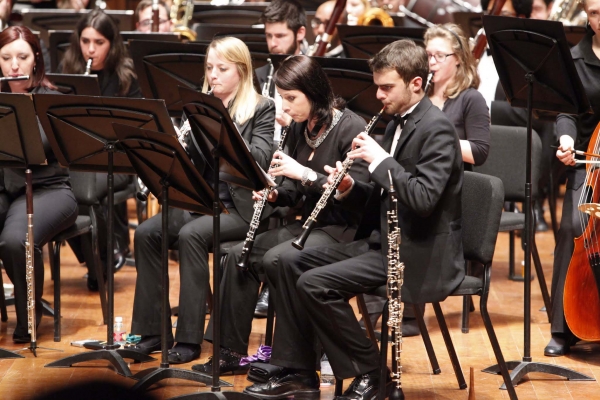 The UW Wind Ensemble, Symphonic, and Concert Bands perform their year-end concert with works by Cindy McTee, David Maslanka, Claude Debussy, and others.

Jiannan Cheng is from Chengdu, China and is in her first year at the University of Washington School of Music where she is enrolled in the MM program in instrumental conducting. She just received her Bachelor’s degree in choral conducting from the China Conservatory of Music (Beijing) in July of 2012.

During her undergraduate study, Jiannan studied choral conducting with Prof. Lingfen Wu and instrumental conducting with Dr. Youqing Yang. She also served as conductor of the College of Computer and Information Choir at Renming University of China, Beijing; the No. 5 Middle and High School Choir; and the Beijing Children’s Palace Choir. Additionally, she founded the College of Civil Engineering Choir at Tsinghua University in May of 2010. Jiannan started her musical training when she was quite young and, in addition to singing, plays piano, violin and flute.

Lewis Norfleet, Concert Band
Lewis Norfleet is currently pursuing a Doctor of Musical Arts degree in instrumental conducting at the University of Washington, studying with Timothy Salzman. Prior to coming to UW, Mr. Norfleet taught at the secondary and collegiate levels for 17 years. Recently, he served as Director of Bands at Union High School (WA), a position he held since the school opened in 2007. During his tenure, Union HS ensembles performed at the 2010 Midwest Clinic, 2012 Music for All/Bands of America National Concert Band Festival, 2013 NAfME Northwest Conference, and the 2010 and 2012 Washington Music Educators Association State Conferences. From 2007 to 2013 he also served as co-conductor of the Southwest Washington Wind Symphony performing numerous concerts each year, including an appearance at the Western International Band Clinic in 2009. Prior to teaching at Union, his high school programs in Oregon and Washington were recognized as Oregon State Concert Band Champions (2005), three-time Northwest Marching Band Circuit Champions (2003, 2005, 2006), and were twice named a Grammy Signature School (2004, 2005). Before teaching in the public schools, Mr. Norfleet was the Director of Athletic Bands and Assistant Director of Bands at Oregon State University (1996-2002). While at OSU the bands performed at the Fiesta Bowl, Oahu Bowl, and the National Concert Hall in Taiwan. He is an alumnus of the University of Oregon where he graduated with honors was was named the Outstanding Graduate Student in Music Education in 1997.

Mr. Norfleet is also active as a composer and arranger having produced over 250 works for concert band, marching band, jazz band, symphony orchestra, percussion ensemble and various chamber ensembles. While most of his works have been privately commissioned, some have been published by Tapspace Publications, Matrix Publishing, Jalen Publishing, Marching Monk, Center X Productions, and Marching Show Concepts. He currently serves as a composer and/or arranger for ensembles across the United States and is in demand as an adjudicator and clinician for concert and marching festivals throughout the country.