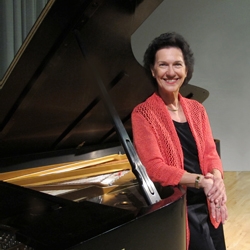 Robin McCabe performs with the UW WInd Ensemble on Dec. 4 at Meany Theater