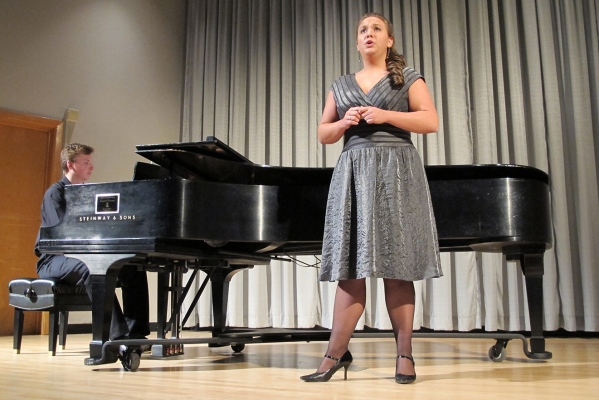 AN EVENING OF EXCELLENCE:

In order of appearance:

Spinto  Soprano  Christina  Kowalski-Holien  is  currently  in  her  second year of doctoral studies and is the student of Associate Professor and Director of Opera Theater Mr. Thomas Harper at the University of Washington.  She plans to graduate in the spring of 2016 with a DMA in Vocal Performance.  Ms. Kowalski-Holien is a native of Germany where she graduated with a Masters degree in Vocal Performance from the Hochschule  fuer  Musik  und  Kunst  in  Frankfurt  am Main.  She  is  a sought-after artist, especially here in the Northwest, but also performs internationally on a regular basis. Her upcoming engagements include an appearance   at   the   Interharmony   Music   Festival   in   Tuscany,   Italy (summer  2015) and the role of Fiordiligi  in "Cosi  fan tutte"  at Skagit Opera in 2016.

A native of upstate New York, Daniel earned awards in both piano and music history early in his college studies.  Prior to arriving in Seattle, he taught  piano  and  related  music  courses  overseas  for  over  a  decade, preparing many of his students for graduate study in the West.  Currently, Daniel is a piano performance major in the school’s DMA program and studies with professor Robin McCabe.  He plans to graduate in 2016.

Daniel Kim is pursuing a double degree in Music BA and Informatics and studies violin under Professor Ronald Patterson.  He plans to graduate with the class of 2019.

Kat is currently  pursuing  her Masters  of Music  in Vocal  Performance (ant. 2015) and studies with Dr. Kari Ragan.   This is her second year at UW.  Recently, she appeared as Lauretta in Gianni Schicci with the UW Opera  Theater,  and  sang  the  part  of  First  Fairy  in  Mendelssohn's Midsummer Night's Dream with the UW Symphony.   Kat has sung in summer programs in Canada,  Michigan  and China.   In the spring, Kat will appear as Pamina in the student cast of Die Zauberflöte.

Adrian is currently in his third year in the jazz studies program at the University of Washington.  A graduate of Roosevelt High School, he has performed around the world in festivals such as Jazz a Vienne, Umbria Jazz Festival, and Essentially Ellington.   He has also has had the oppor- tunity to share the stage with jazz greats Wynton Marsalis,  Billy Hart, Matt Wilson, and Ted Poor. Adrian has studied with Mike Edwards, Mark Taylor, and is currently a student of Greg Sinibaldi.  Outside of school Adrian plays in a rock group called the Longer Legs and is often called to play various jazz gigs around Seattle.  Adrian plans to graduate in 2016.

from CELLO SUITE #2 IN D MINOR:

Andy is a sophomore at the University of Washington where he studies with Christopher Olka, principal tubist with the Seattle Symphony Orchestra.   An accomplished  and busy musician,  Andy has performed with many fine ensembles including the Seattle and Boston Symphony Orchestras.   Last summer, Andy was awarded the tuba fellowship at the Tanglewood Music Center in Lennox, MA where he performed with the TMC Orchestra. As a soloist, Andy won first prize in the 2013 Music Teacher National Association Senior Brass Recital Competition in Ana- heim,  CA.   In his free time,  Andy  enjoys  hiking  around  the beautiful Pacific Northwest.  Andy plans on graduating in 2017 with his Bachelors of Music.

During the academic year, Sabrina is both a student and a teacher. Teaching elementary through high school students, she is an apprentice to  the  local  Bonnie  Blanchard,  teacher  and  author  of  Music  for  Life books.  Sabrina is also the elected Publicist for the Seattle Flute Society, announcing  the society’s  events via management  of their social  media pages and newsletters.

Daniel is in his second year at University of Washington pursuing a BA in Music and is a student of Craig Sheppard.   He has studied with John O’Conor  at the Aspen  Music  Festival  and School,  he has taken piano lessons at the SF Conservatory for 4 years with Dr. Robert Schwartz and Dr. William Wellborn, and he has also studied with Frederick Weldy and Dainius Vaicekonis.   He was a winner at the Junior Bach festival 2009 and was a national finalist at the MTNA National duet competition with his brother.   He won four gold medals and two silver medals at the US Open Music Competition as well as being one of the gold of gold medal- ists at the winners’ concert, 2nd prize in Classical Masters 2012, and 3rd prize at the Etude Club of Berkeley Scholarship Competition 2012.   He plans to graduate in 2017.

Melvin is a chemistry and jazz studies double-major.   He is a student of Professor Marc Seales and plans to graduate in 2016.