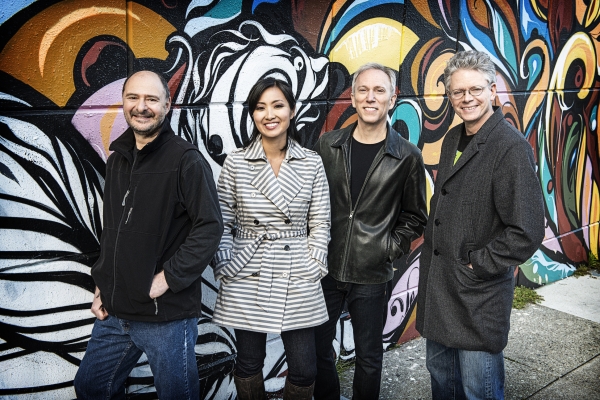 Composer and professor emeritus Ken Benshoof graduated from the University of Washington School of Music in 1958 with a degree in composition and in 1977 joined the faculty, serving as associate professor of composition until his retirement in 1992.

Violist Garth Knox is known for his work with the Arditti Quartet and the Ensemble intercontemporain and his close collaboration with the leading composers of today. He can be seen in performance on the School of Music's Feb. 22 Music of Today concert.

For more than 40 years, the Kronos Quartet—David Harrington (violin), John Sherba (violin), Hank Dutt (viola), and Sunny Yang (cello)—has pursued a singular artistic vision, combining a spirit of fearless exploration with a commitment to continually re-imagining the string quartet experience. In the process, Kronos has become one of the most celebrated and influential groups of our time, performing thousands of concerts worldwide, releasing more than 50 recordings of extraordinary breadth and creativity, collaborating with many of the world's most intriguing and accomplished composers and performers, and commissioning more than 850 works and arrangements for string quartet. In 2011, Kronos became the only recipients of both the Polar Music Prize and the Avery Fisher Prize, two of the most prestigious awards given to musicians. The group’s numerous awards also include a Grammy for Best Chamber Music Performance (2004) and “Musicians of the Year” (2003) from Musical America.

Integral to Kronos’ work is a series of long-running, in-depth collaborations with many of the world’s foremost composers. One of the quartet’s most frequent composer-collaborators is “Father of Minimalism” Terry Riley, whose work with Kronos includes Salome Dances for Peace(1985–86); Sun Rings (2002), a multimedia, NASA-commissioned ode to the earth and its people, featuring celestial sounds and images from space; and The Serquent Risadome, premiered during Kronos’ 40th Anniversary Celebration at Carnegie Hall in 2014. Kronos commissioned and recorded the three string quartets of Polish composer Henryk Górecki, with whom the group worked for more than 25 years. The quartet has also collaborated extensively with composers such as Philip Glass, recording a CD of his string quartets in 1995 and premiering String Quartet No. 6 in 2013, among other projects; Azerbaijan’s Franghiz Ali-Zadeh, whose works are featured on the full-length 2005 release Mugam Sayagi; Steve Reich, from Kronos’ performance of the Grammy-winning composition Different Trains (1989) to the September 11–themed WTC 9/11(2011); and many more.

In addition to its role as a performing and recording ensemble, the quartet is committed to mentoring emerging performers and composers and has led workshops, master classes, and other education programs via the San Francisco Conservatory of Music, the California State Summer School for the Arts, Carnegie Hall’s Weill Music Institute, and other institutions in the U.S. and overseas. Kronos has recently undertaken extended educational residencies at UC Berkeley’s Cal Performances, The Clarice at the University of Maryland, and with the Kaufman Music Center’s Face the Music.

In 2015 the non-profit Kronos Performing Arts Association (KPAA)  launched a new commissioning and education initiative – Fifty for the Future: The Kronos Learning Repertoire. With Carnegie Hall as a lead partner, KPAA is commissioning 50 new works – 10 per year for five years – devoted to contemporary approaches to the quartet and designed expressly for the training of students and emerging professionals. The works will be created by an eclectic group of composers – 25 women and 25 men. The quartet will premiere each piece and create companion materials, including scores and parts, recordings, videos, performance notes, and composer interviews, that will be distributed online for free. Kronos’ Fifty for the Future will present quartet music as a living art form, and provide young musicians with both an indispensable library of learning and a blueprint for their own future collaborations with composers. Kronos, Carnegie Hall, and an adventurous list of project partners that includes presenters, academic institutions, foundations and individuals, have joined forces to support this exciting new commissioning, performance, education, and legacy project of unprecedented scope and potential impact.

Composer/pianist Ken Benshoof was born in 1933 on a Nebraska farm. He went through high school in Fairbanks Alaska. Studies at Pacific Lutheran University and the Spokane Conservatory were followed by a two year stint in the U.S. Army, a bachelors degree from the University of Washington, a Masters at San Francisco State University, and studies in London at the Guildhall School of Music as a Fulbright Scholar.

Primarily a composer of chamber pieces, Benshoof has received commissions from a wide variety of sources, most notably the Kronos String Quartet for whom he has produced eight works. He also served as resident composer at San Diego's Old Globe Theater over several seasons and at the Seattle Repertory Theater for a number of years.

Garth Knox was born in Ireland and grew up in Scotland. Being the youngest of four children who all played string instruments, he was encouraged to take up the viola, and he quickly decided to make this his career. He studied at the Royal College of Music in London with Fredrick Riddle, where he won several prizes for viola and for chamber music. Thereafter he played with most of the leading groups in London in a mixture of all repertoires, from baroque to contemporary music.
In 1983 he was invited by Pierre Boulez to become a member of the Ensemble Intercontemporain in Paris, where he had the chance to do much solo playing (including concertos directed by Pierre Boulez) and chamber music, touring widely and playing in international festivals.
In 1990 Garth Knox joined the Arditti String Quartet, playing in all the major concert halls of the world, working closely with and giving first performances of pieces by most of today's leading composers including Ligeti, Kurtag, Berio, Xenakis, Lachenmann, Cage, Feldman and Stockhausen (the famous "Helicopter Quartet").
Since leaving the quartet in 1998, Garth Knox has given premieres by Henze (the Viola Sonata is dedicated to him), Ligeti, Schnittke, Ferneyhough, James Dillon, George Benjamin and many others. He also collaborates regularly in theatre and dance projects and has written and performed shows for children and young audiences. Improvisation is also an important part of his musical activity, and he has performed with George Lewis, Steve Lacy, Joel Léandre, Dominique Pifarély, Bruno Chevillon, Benat Achiary, Scanner and many others. He appears on the Frode Haltli CD Passing Images. In the past decade he has begun to write his own music, and is much in demand for theatre, dance and film scores as well as concert pieces and instrumental works.
Garth Knox has recently begun to explore the possibilities of the viola d'’amore in new music, with and without electronics, and is in the process of creating a new repertoire for this instrument. His CD D'Amore (EMI New Series 1925) features old and new music for the viola d'amore.

Garth Knox now lives in Paris playing recitals, concertos and chamber music concerts all over Europe, the USA and Japan. His solo CD with works from Ligeti, Dusapin, Berio, Kurtág and others (MO 782082) won the coveted Deutsche Schallplaten Preis in Germany.