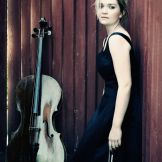 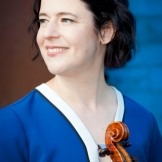 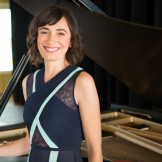 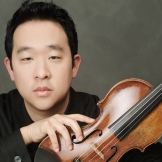 “Charismatic” (NYTimes) cellist, Sæunn Thorsteinsdóttir recently made her debut with the Los Angeles Philharmonic which the LA Times praised her for her “emotional intensity”.  Following the release of her recording of Britten´s Suites for Solo Cello, last season she performed in some of the world´s greatest halls including Carnegie Hall, Suntory Hall and Disney Hall.  This season will mark her debut with the Toronto Symphony and  starting in the fall of 2013, Sæunn is Artist-in-Residence at Sonoma State University´s Green Music Center in California. 2013-2014 will also be Sæunn´s inaugural season as cellist of the Manhattan Piano Trio, beginning with her debut concert at the Chautauqua Music Festival.  An avid chamber musician, she has collaborated in performance with Itzhak Perlman, Mitsuko Uchida, Richard Goode and members of the Emerson, Guarneri and Cavani Quartets and has participated in numerous chamber music festivals, including Prussia Cove and Marlboro, with whom she has toured. Along with the masterpieces of the 18th, 19th and 20th century, Sæunn is constantly inspired by works composed in our time and enjoys working with living composers.  In addition to working closely with Daníel Bjarnason on his award-winning composition “Bow to String”, she has premiered dozens of works, including new pieces by Peter Schikele, Paul Schoenfield, Anna Thorvaldsdóttir and Kendall Briggs.   Sæunn has garnered numerous top prizes in international competitions, including the 2008 Naumburg Competition in New York and the Antonio Janigro Competition in Zagreb, Croatia. She received a Bachelor of Music from the Cleveland Institute of Music and a Master of Music from The Juilliard School. Her principal teachers include Richard Aaron, Tanya L. Carey and Joel Krosnick.

Cristina Valdés joined the faculty of the UW School of Music in Fall 2014 as an artist in residence in the keyboard program. Committed to both contemporary and standard repertoire, Valdés is known for presenting innovative concerts with repertoire ranging from Bach to Xenakis. She has performed across four continents and in a multitude of venues including Lincoln Center, Carnegie Recital Hall, Nordstrom Hall, and the Kennedy Center. An avid chamber musician, Valdés has toured extensively with the Bang On a Can “All Stars” and has performed with the Seattle Chamber Players, the Mabou Mines Theater Company, the Parsons Dance Company, Antares, and Trio V. Her festival appearances include the Singapore Arts Festival, Brisbane Arts Festival, Foro Internacional de Musica Nueva in Mexico City, New Music in Miami Festival, Festival of Arts and Ideas, and the Festival of Contemporary Music in El Salvador among others. She has also performed with the Johns Hopkins Symphony Orchestra, the Binghamton Philharmonic, and the Stony Brook Symphony Orchestra. Valdés can be heard on several recordings on the Newport Classics, Albany, and Innova labels. She holds degrees from the New England Conservatory and SUNY at Stony Brook, and is the recipient of an Arts International Grant, the Thayer Award for the Arts, and an Yvar Mikhashoff Trust for New Music grant.

Hailed by Gramophone as “an artist of commanding and poetic personality” and described as “staggeringly virtuosic” by The Strad, violist Melia Watras (meliawatras.com) has distinguished herself as one of her instrument’s leading voices. As a soloist, chamber musician and recording artist, Watras has championed the works of living composers throughout her career. She has commissioned, premiered and recorded numerous new compositions, while appearing at prestigious venues such as Carnegie Hall, Weill Recital Hall, and Alice Tully Hall. Recent and upcoming highlights include the European premiere (aired live by the Danish Broadcasting Corporation) of Pulitzer Prize-winner Shulamit Ran’s Perfect Storm, a piece that was written for Watras, and collaborations with violists Atar Arad and Garth Knox.

Watras’s expanding discography has received considerable attention and praise from the media. The Seattle Times named her most recent CD, Short Stories, a Critics’ Pick, and marveled at her “velocity that seems beyond the reach of human fingers.” Of her debut solo CD (Viola Solo), Strings remarked, “Watras is a young player in possession of stunning virtuosic talent and deserving of the growing acclaim,” and called her second release (Prestidigitation) “astounding and both challenging and addictive to listen to.” For Viola Solo, Watras adapted John Corigliano’s Fancy on a Bach Air for viola. Her edition of this work is published by G. Schirmer, Inc.

With the Corigliano Quartet, Watras has concertized throughout the United States and abroad, garnering much critical acclaim. Described as “musicians who seem to say ‘Listen to this!’” by the New York Times, the ensemble’s Naxos label CD was named one of the Ten Best Classical CDs of the Year by The New Yorker and prompted Gramophone to proclaim, “the unbridled force and full-metal virtuosity that the Corigliano Quartet unleash on this music is astounding.” The quartet’s awards include the Grand Prize at the Fischoff Competition and the ASCAP/CMA Award for Adventurous Programming. As a member of Open End, an ensemble specializing in new music and improvisation, Watras has performed in France, Denmark and the United States, and has recorded for Albany Records. Watras’s ongoing exploration of improvisation has led her to collaborating with jazz innovators Cuong Vu and Ted Poor, and to writing her own compositions. She has written solo and chamber music works for viola, and her violin/viola duo Liquid Voices was recently given its European premiere.

A versatile performer, Watras has enjoyed collaborations with dance and theater. She appeared as violist/dancer in the premiere of Kathryn Sullivan's At Home, at the Merce Cunningham Studio in New York City. Music from her Viola Solo CD was featured in director Sheila Daniels’s production of Crime and Punishment at Intiman Theatre, and she worked as music consultant for Braden Abraham’s production of Opus at Seattle Repertory Theatre.

Melia Watras was born in Honolulu, Hawaii and began her musical studies on the piano at age 5. Soon after, she turned to the viola and made her debut at 16, soloing with the Dayton Philharmonic Orchestra. Her formal studies took her to Indiana University, where she studied with Abraham Skernick and Atar Arad, earning Bachelor’s and Master’s degrees and the prestigious Performer’s Certificate. While at Indiana, Watras began her teaching career as Professor Arad’s Associate Instructor, and was a member of the faculty as a Visiting Lecturer. She went on to study chamber music at the Juilliard School while serving as a teaching assistant to the Juilliard String Quartet.

Watras serves as Associate Professor of Viola and chair of Strings at the University of Washington, where she currently holds the Adelaide D. Currie Cole Endowed Professorship and was previously awarded the Donald E. Petersen Endowed Fellowship and the Royalty Research Fund. Watras has given viola and chamber music classes at schools such as Indiana University, Cleveland Institute of Music, Strasbourg Conservatoire (France), and Chosun University (South Korea). She has twice returned to her alma mater, Indiana, to teach as a guest professor. Watras currently resides in Seattle with her husband, Pacific Northwest Ballet concertmaster Michael Jinsoo Lim. She plays a viola made by Samuel Zygmuntowicz.

Praised by Gramophone for playing with “delicious abandon,” and described as “bewitching” by the Seattle Times, violinist Michael Jinsoo Lim enjoys a dynamic musical career as concertmaster, soloist, chamber musician, recording artist, and teacher. Recently named concertmaster of the Pacific Northwest Ballet Orchestra in Seattle, Lim is also widely known for his work as co-founder of the renowned Corigliano Quartet. He is in demand as a chamber musician and as a performer of new and experimental music, performing as a member of Open End, an ensemble specializing in contemporary music and improvisation.

As a member of the Corigliano Quartet (www.coriglianoquartet.com), Lim has enjoyed critical acclaim across the U.S. and abroad and has won numerous awards, including the Grand Prize at the Fischoff Chamber Music Competition and the ASCAP/CMA Award for Adventurous Programming. Called “musicians who seem to say, ‘Listen to this!’” by the New York Times, the Corigliano Quartet has performed in the nation’s leading music centers, including Carnegie Hall, Weill Recital Hall, and the Kennedy Center. The group’s most recent CD was named by the New Yorker as one of the top ten Classical recordings of 2007.

Lim’s work as a performer has also extended to the theater. He starred in director Nick Schwartz-Hall’s Tempo of Recollection, a stage performance about the life and work of composer Erwin Schulhoff, and will serve as consultant for Seattle Repertory Theatre’s upcoming production of Opus, directed by Braden Abraham.

Lim was born in Lafayette, Indiana and began playing the violin at the age of four, studying with his mother, Sun Boo Lim. He went on to study with Vartan Manoogian before beginning his formal training at Indiana University, where he was a pupil of the legendary violinist and teacher Josef Gingold. Lim received Bachelor’s and Master’s degrees from Indiana University, where he won First Prize in the school’s Violin Concerto Competition. He also held a faculty position at Indiana as a Visiting Lecturer. Later, he taught chamber music at the Juilliard School as an assistant to the Juilliard String Quartet. He has served as Musical Artist in Residence at Dickinson College and on the faculty of the New York Youth Symphony Chamber Music Program. He currently serves on the faculty of Cornish College of the Arts, where he teaches violin, viola, and chamber music. Lim also maintains a private studio of violin and viola students.

Lim has recorded for Naxos, DreamWorks, Albany Records, CRI, Bayer Records, and Aguava New Music, and appears on numerous television and film soundtracks, including the Oscar-winning score to Brokeback Mountain. He has performed live on WFMT-Chicago’s Live From Studio One and has been heard on NPR programs such as Performance Today and All Things Considered. Lim has made radio and television appearances in the U.S., Spain, Costa Rica, and Korea.

In addition to his work as a performer, Lim has also served as a recording producer. He has produced the critically acclaimed CD, Melia Watras: Viola Solo and co-produced Prestidigitation, Ms. Watras’s latest recording on the Fleur De Son label. Lim currently lives in Seattle with his wife, violist Melia Watras.