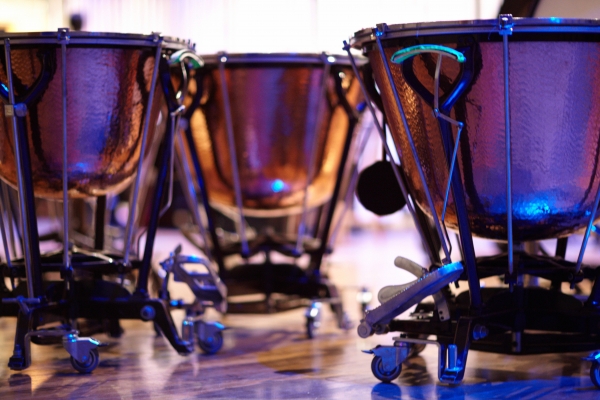 Bonnie Whiting joins the School of Music faculty in Fall 2016 as Chair of Percussion Studies.

Bonnie Whiting performs and commissions new experimental music for percussion. She seeks out projects involving non-traditional notation, interdisciplinary performance, improvisation, and the speaking percussionist.Recent work includes a series of concerts at the John Cage Centennial Festival in Washington DC, and performance as a soloist in Tan Dun's Water Passion under the baton of the composer himself. In 2011, she joined red fish blue fish percussion group in premiering the staged version of George Crumb’s Winds of Destiny directed by Peter Sellars and featuring Dawn Upshaw for Ojai Festival. Whiting has collaborated with many of today's leading new music groups, including eighth blackbird (the “Tune-in” festival at the Park Avenue Armory), the International Contemporary Ensemble (American premiere of James Dillon’s Nine Rivers at Miller Theatre, as an on-stage percussionist for Andriessen’s epic music theatre work De Materie), Bang on a Can (Steve Reich’s Music for 18 Musicians for the LA Philharmonic’s Green Umbrella Series) and Ensemble Dal Niente (the Fromm Concerts at Harvard.) During the summer, she is a member of the Walden Players, enesmble in residence at the Walden School in Dublin, NH.She performs regularly with percussionist Allen Otte; they have presented concerts at The Stone in New York, The New York City Electroacoustic Music Festival, throughout New Zealand, and at colleges and universities around the country. Her debut album, featuring an original solo-simultaneous realization of John Cage’s 45’ for a speaker and 27’10.554” for a percussionist, will be released by Mode Records in 2015.A dedicated arts educator, Bonnie spent three years with Tales & Scales, a quartet combining new music, dance, and theater for family audiences, giving over 400 performances in 25 states and appearing with the Dallas, Oregon, Indianapolis, Buffalo, and Louisville orchestras. She also helped to develop several experimental music programs in Southern California: The Children’s Universal Language Orchestra in Spring Valley as well as residencies at the Monarch School (for children affected by homelessness) and the inner-city Lincoln High School in San Diego.She was a member of the Lucerne Festival Academy Orchestra in Switzerland under the direction of Pierre Boulez, and has performed throughout Europe as well as Canada and Panama. Bonnie has worked with composers Jerome Kitzke, Randall Woolf, John Luther Adams, Michael Pisaro, and Frederic Rzewski, and she champions the music of her peers. Bonnie attended Interlochen Arts Academy, Oberlin Conservatory (BM), University of Cincinnati College-Conservatory of Music (MM), and University of California San Diego (DMA.) She has served on the faculties of the University of Alaska Fairbanks, the DePauw University School of Music, and as a lecturer at UC San Diego. She moves back to Seattle, WA to lead the percussion department at the University of Washington in the fall of 2016.