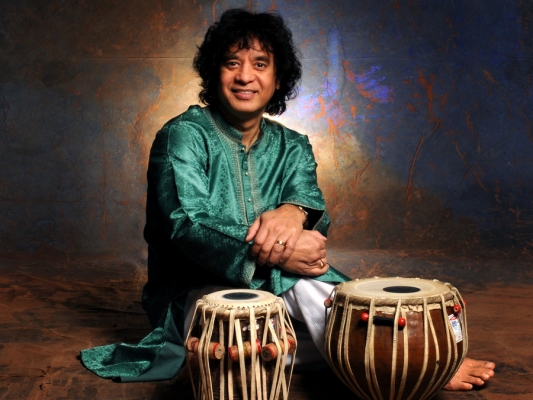 Fall Quarter Ethnomusicology Visiting Artist Zakir Hussain is known in India and worldwide for his virtuosity in the fields of world music and percussion as a tabla player, percussionist, and composer. Widely considered a chief architect of the contemporary world music movement, he has enjoyed many historic collaborations with artists such as John McLaughlin and L. Shankar, Mickey Hart, George Harrison, YoYo Ma, and many others. In this performance, Hussain performs a tabla solo and presents the culmination of his work with UW faculty and students. With accompanist Ganesh Rajagopalan, violin.

NOTE: This event is sold out.

Raga Vachaspati, originating in the South Indian system, uses the scale (with D as fundamental note): D, E, F#, G#, A, B, C (in Indian notation: सा रे ग म॑ प ध *न॒ ). The theme for this piece was proposed by Zakir Hussain as a basic theme for this performance. The students in the ensemble class he taught this quarter at the University of Washington will perform it today. The ensemble includes many instruments: Cello, Violin, Bass, Guitar, Erhu, Trombone, Trumpet, Saxophone, Tabla-s, Cajons, Piano, Keyboard, Electric Guitar and Vocals.

This interpretation of this well-known piece is improvised and performed ex tempore by the players.

Zakir Hussain worked in four jam sessions with some School of Music faculty members and students on an arrangement that is the next (#4) piece in this program. Two of the students suggested that they do this piece in today’s concert. It is a classic, and aptly named for its creator, Charlie “Yardbird” Parker.

“Rama, Rama, Gunaseema” are the opening words of a South Indian composition for voice, by the composer Swati Tirunal (1813-1846), who was the Maharaja of the State of Travancore in Kerala, India. It is based on Raga Simhendra Madhyam. With D as fundamental note, the scale is: D, E, F, G#, A, B♭, C# (in Indian notation: सा रे ग॒ म॑ प ध॒ *न ). In this piece, just the two opening lines of the composition are used as a theme, from which ex tempore improvised solos are launched. Note how the second line of the composition resolves on the augmented fourth G#. This may be unfamiliar to the western ear, but the success of this piece illustrates how such experiments can build cross-cultural bridges.

The traditional Tabla solo gives a Tabla player the opportunity to exhibit his artistry by expounding a wide range of material for the Tabla. Such a solo recital starts with a section called Peshkar (literally meaning a presentation) which is a leisurely exposition of the temporal structure of the tala selected for exposition. After establishing a familiarity with the tala structure, the performer tries to highlight mastery over several other types of pieces in the extensive repertoire of Tabla (such as Kaida, Rela, Tukda, Gat, and so on). These pieces are generally based on the same Tala structure that has been chosen initially. Each piece is composed by assigning Tabla syllables to beats of the cycle, and a single composition can extend over several repetitions of the cycles. Syllables for various compositions for Tabla are recited, and then played. Astonishingly complex compositions are the result. Such a recital is always accompanied by a melodic theme, usually played by an instrumentalist, who serves as the timekeeper for the Tabla player. However, depending on the occasion, the accompanist’s role can become more prominent, as we will see in today’s presentation.

Zakir Hussain is today appreciated both in the field of percussion and in the music world at large as an international phenomenon. A classical tabla virtuoso of the highest order, his consistently brilliant and exciting performances have not only established him as a national treasure in his own country, India, but gained him worldwide fame. His playing is marked by uncanny intuition and masterful improvisational dexterity, founded in formidable knowledge and study. The favoritE accompanist for many of India’s greatest classical musicians and dancers, he has not let his genius rest there. Widely considered a chief architect of the contemporary world music movement, Zakir’s contribution to world music has been unique, with many historic collaborations, including Shakti, which he founded with John McLaughlin and L. Shankar, Remember Shakti, the Diga Rhythm Band, Making Music, Planet Drum with Mickey Hart, Tabla Beat Science, Sangam with Charles Lloyd and Eric Harland and recordings and performances with artists as diverse as George Harrison, YoYo Ma, Joe Henderson, Van Morrison, Airto Moreira, Pharoah Sanders, Billy Cobham, Mark Morris, Rennie Harris, and the Kodo drummers. His music and extraordinary contribution to the music world were honored in April, 2009, with four widely-heralded and sold-out concerts at Carnegie Hall’s Artist Perspective series.

Ganesh Rajagopalan is one of the top classical violinists in India today. Initially trained in the Carnatic Classical tradition of South India, he has melded his technique and background with many other genres, ranging from North Indian Classical, to jazz, folk, blues etc. He has collaborated with a variety of master instrumentalists in India as well as abroad. The violin has played a significant role in the Music of India for over 200 years. Especially in the South, it has become the instrument of choice for accompaniment in vocal concerts. In the years since its inception, there have been numerous excellent violinists in the Southern tradition. Ganesh Rajagopalan is a worthy inheritor of this tradition.