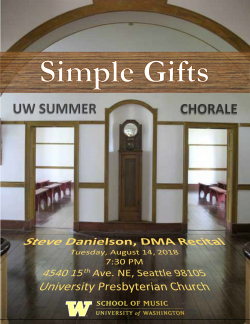 Steve Danielson was the director of choirs at Germantown High School from 2005-2016. He earned a BA in Music from Brigham Young University and an MM in Choral Conducting from the University of Memphis. He directed four choirs: GHS Chorus I, Women’s Chorus, Chorale, and Chamber Choir. In addition to the auditioned choruses, he also sponsored four clubs: Tri-M Music Honor Society; Tempo Club, a classical music exposure club; A Ca-Fellas, a male a cappella group; and A Ca-Bellas, a female a cappella group. He has been musical director for 15 shows at the Poplar Pike Playhouse as well as one at the Harrell Theater. He has been nominated 4 times for Outstanding Musical Direction from the Orpheum High School Musical Theater Awards, which he won in 2010 for his work on Parade. He also wrote, directed and starred in the original musical Here to Stay: the Joseph Stay Story.

For more information about his conducting pursuits as well as his compositions, visit his website at SDCompose.weebly.com. Many of his choral works are also available at CadenzaOne.com and SheetMusicPlus.com.

Steve and his wife, Angi, have seven children and live in Lacey.