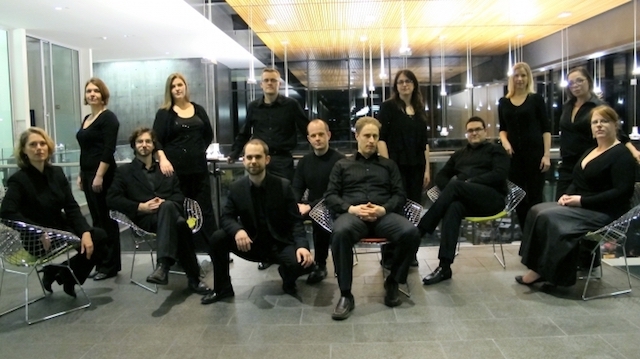 Solaris Vocal Ensemble, a 12-voice ensemble directed by UW faculty member Giselle Wyers and specializing in the performance of contemporary and electro-acoustic vocal works, presents “The Explorer’s Edge,”  a program on the theme of exploration, by land and sea, in the Arctic regions, in flight, and at the edge of the universe.

“The Explorer’s Edge” features works about the experience of exploration, by land, sea, in the Arctic regions, in flight, or at the edges of the universe. Jeff Rice, guest composer, premieres his work Madame Moth in homage to Pauline Oliveros’ Bye Bye Butterfly, and will include live processing of the ultrasonic wing beats of wax moths alongside the voices of Solaris. Peter Bracilano, lighting designer, will create various atmospheres in the resonant space of Good Shepherd Center.

Thomas Weelkes- Thule, the period of cosmography and The Andalusian Merchant

Mason Bates- Sirens “Die Lorelai” and “from The Book of Matthew”

Samuel Barber A Stopwatch and an Ordnance Map

Solaris Vocal Ensemble, a project-based vocal ensemble, is prized for its innovative approach to the performance of contemporary American music. Their premiere album Floodsongs won the The American Prize Ernst Bacon Memorial Award for the Performance of American Music, in the professional ensemble division. Floodsongs (on the Albany Records label) has been widely broadcast across the United States, notably on New York City’s radio show “New Sounds.”

Each project that Solaris embarks upon is fully unique. Their first concert utilized electronics, exploring the relationship between ancient and modern compositional styles, and featured four American world premieres. In “Burning the Bridge,” Solaris was choreographed by dancer Carol Schouboe to create movement representing archetypal aspects of courtship across the ages, using music from Machaut, Busnois, Monteverdi, Augustinas and Kyr. In 2017, Solaris collaborated with the Seattle Modern Orchestra and special guest trombonist Stuart Dempster in two joint concerts with repertoire composed by Stuart Dempster, Julia Wolfe and Robert Erickson.

Giselle Wyers is the Donald E. Petersen Endowed Professor of Choral Music at the University of Washington, where she conducts the award-winning University Chorale and teaches graduate and undergraduate courses in choral conducting and music education. University Chorale's 2008 performance of the Genesis Suite with Seattle Symphony was termed "brilliant" by the Seattle Times, and their latest CD, Resonant Streams (on the MSR Music Recordings label) was featured in Gramophone magazine last spring. Her semi-professional chorus, Solaris Vocal Ensemble, specializes in the performance of contemporary American choral literature. Their premiere album Floodsongs won The American Prize Ernst Bacon Memorial Award for the Performance of American Music, in the professional ensemble division for 2017-18.

As a composer, Wyers is frequently commissioned to write new works for community and educational choruses. Her music is mentioned by Seattle-based reviewer Melinda Bargreen’s in the book Classical Seattle: Maestros, Impresarios, Virtuosi, and Other Music Makers. Wyers’ choral works are published by Santa Barbara Music Publishing Company as part of the "Giselle Wyers Choral Series," and have been performed across the United States, Canada, Australia, Cuba, and numerous European cities. Her latest commission is a work on the theme of homelessness entitled “A Roof and a Bed”, due to premiere with the Portland Lesbian Choir in 2020. Wyers is also committed to mentoring scholar-writers and serves on the editorial board of ACDAs Choral Journal.

Peter Bracilano, Production Manager, Lecturer, is a graduate in lighting design from North Carolina School of the Arts. A long time Seattle resident, Peter is the resident lighting designer for Teatro Zinzanni locally and in San Francisco plus Seattle Men’s and Women’s Chorus for many years. He has also designed for Seattle Opera’s Young Artist Program, Pacific Northwest Ballet, 5thAvenue Theatre and Village Theatre. He has spent summers as a lighting designer at the Spoleto Festival of the Two Worlds in Italy, and he has designed lighting for the Spoleto Festival in Charleston, South Carolina as well. Mr. Bracilano’s extensive design work on the East Coast includes ten years with Civic Light Opera in Pittsburgh. Other companies he was worked with include Paramount Parks, Dallas Summer Musicals and Theatre of the Stars in Atlanta and under the Stars in Houston. He has been the Associate Lighting Designer for the European tour of the musical Hair and Ken Hills’ Phantom of the Opera in Singapore as well as for several international productions of Gershwin’s Porgy and Bess.

Jeff Rice is a Seattle-based electronic musician with a strong interest in natural sound, both real and imagined. He has composed music using cosmic rays, the wing beats of wax moths, found objects  and radio waves as well as traditional electronics. He is perhaps most well-known for his audio field recordings, which have appeared on National Public Radio, the digital version of The New York Times magazine, occasional feature films and many national media outlets. He continues to record in often beautiful and hard to get to locations throughout the Western United States. He holds an M.F.A. in Electronic Music and Recording Media from Mills College and performs occasionally with the seminal 1990s rock band the Tarantula Sisters.