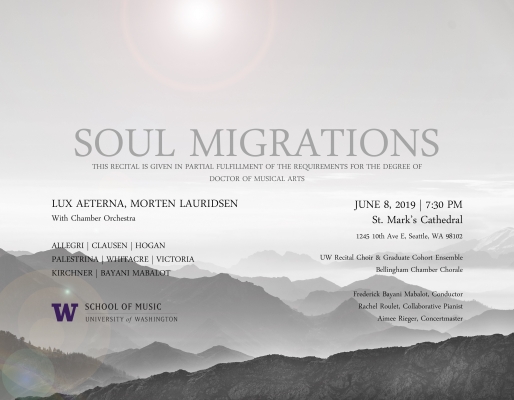 This recital is delivered in partial fulfillment of the requirements for the Doctor of Musical Arts.

Frederick Bayani Mabalot is a composer and choral conductor from Southern California. He is now in the final stages of completing his Doctor of Musical Arts degree in Choral Conducting from the University of Washington School of Music with Dr. Geoffrey Boers and Dr. Giselle Wyers. Frederick is a graduate of The Royal Danish Academy of Music, Sydney Conservatorium of Music, and California State University.  He is classically trained in piano and voice and received several years of instruction as a choral and orchestral conductor before his doctoral studies.

​He completed initial composition studies at Sydney Conservatorium of Music in Australia, where he graduated with First Class Honours. At Sydney Conservatorium, Frederick studied composition with Dr. Michael Smetanin, Dr. Matthew Hindson, and Dr. Paul Stanhope. In addition to composition, he studied voice with soprano Anke Höppner. He was mentored in choral conducting by Dr. Neil McEwan, who also became a foremost advocate of his choral music. Frederick completed graduate studies in composition at The Royal Danish Academy of Music in Copenhagen with internationally renowned Danish composers Hans Abrahamsen, Niels Rosing-Schow, and Jeppe Just Christensen as his mentors. He continued classical voice study with Helene Gjerris and Jan Lund and conducting with Maestro Jørgen Fuglebaek. Frederick holds a Bachelor of Music Degree in Vocal Performance from California State University in Northridge. He studied voice with Dr. David Scott, and piano with Charles Fierro and Dr. Jeanine Jacobson. While at California State University, Frederick studied choral conducting with Paul Smith, and orchestral conducting with Gary Pratt.

​Frederick has been a member of numerous collegiate and professional choral ensembles including the highly acclaimed Sydney Chamber Choir, and has worked and performed as a choral conductor in Australia, Europe, and the United States. He has held various director of music, organist, and collaborative pianist positions with various churches within the Catholic Archdiocese of Los Angeles. He is the conductor and co-founder of DKDM Voices,The Royal Danish Academy of Music Voices. He currently serves as Director of Music and Liturgy for the historic Church of the Assumption in Bellingham, and the Artisric Director/Conductor for Bellingham Chamber Chorale.

​Frederick has a thriving career as a composer. There have been performances of his music in Australia, Belgium, Denmark, France, Germany, Hong Kong, Italy, Philippines, Spain, South Africa, Sweden, the United Kingdom, and the United States. A revised version of his "Stabat Mater," an oratorio- chamber opera premiered at the Copenhagen's Pulsar Music Festival,  will be performed in 2020. Performances of his song cycles for soprano and chamber ensemble both in the United States and Europe are also in the works for 2020. The Bellingham Chamber Chorale will give the world-premiere performance of his new work "Incarnations" for choir, soprano soloists, and orchestra in their Spring 2020 concert.

Frederick is a member of USA's ASCAP and Denmark's KODA. For more information, please visit frederickbmabalot.com .