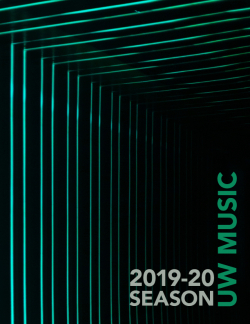 A new season of music-making begins at the University of Washington School of Music, and UW Music's 2019-20 concert season presents music from across the centuries and up to the present moment in a panoply of styles, approaches, and techniques.

The UW welcomes concert violinist Rachel Lee Priday to the School of Music faculty in Fall Quarter 2019. Newly appointed as an assistant professor in the strings program, Rachel brings astonishing talent and wide-ranging interests to the UW's already-stellar strings faculty. Hear her perform several times this season, with recitals on Oct. 24 and May 19. She also joins with faculty colleagues Craig Sheppard, piano, and Sæunn Thorsteinsdóttir, cello, to perform the first two of a four-concert performance (over two seasons) of the complete cycle of Beethoven piano trios (Dec. 9, Feb. 29) in honor of the composer’s 250th birthday. Thorsteinsdóttir, meanwhile, presents three Meany recitals in 2019-20, starting with a duo concert with pianist Julio Elizalde (March 9). She returns to Meany Hall in May to perform the six Cello Suites of J. S. Bach over two consecutive evenings (May 21, 22).

All three of the above faculty performers also appear prominently with the UW Symphony Orchestra (David Alexander Rahbee, director) in 2019-20, with Thorsteinsdóttir and Priday  joining colleagues Mary Lynch, oboe, and Seth Krimsky, bassoon, in a Dec. 6 performance of Haydn’s Sinfonia Concertante, Op. 84, and Sheppard appearing on May 1 to perform Mozart’s Piano Concerto No. 25 in C Major with the orchestra.  Other performances by the UW Symphony Orchestra include a Nov. 1 program featuring faculty pianist Cristina Valdés performing Bartók’s Piano Concerto No. 3. The orchestra’s annual performance with the Combined UW Choirs (March 13), includes music by Schubert, Dallapiccola, Schumann, and Ravel, conducted by David Alexander Rahbee.

Other season highlights include guest artist concerts by renowned chamber group Ensemble Dal Niente (May 15), performing the music of UW faculty composers; a national tour stop by the President’s Own Marine Band (Oct. 2); a special concert of concertos performed by the Philharmonia Northwest with UW piano students (May 31); a faculty recital by piano professor Robin McCabe shared with students from her UW studio (April 24); and a New Music Festival, featuring concerts by visiting artists and ensembles (April 14 and 17), faculty improv band Indigo Mist performing with renowned saxophonist George Garzone (April 10), and a special performance of Steve Reich’s Music for 18 Musicians, performed by members of the Modern Music Ensemble, Percussion Studio, faculty directors Bonnie Whiting and Cristina Valdés, and others (April 21).

A brand new series in 2019-20, Strings Attached, recognizes the many concerts from the UW instrumental and voice studios presented each year in the School of Music’s Brechemin Auditorium. These performances have been presented for the past several years with free admission, thanks to a gift from the estate of  Mina Brechemin Person, continuing the Brechemin family's long history of providing important support for UW music students.

The above-mentioned events only skim the surface of all that is ahead in the School of Music's 2019-20 concert season.  All upcoming performances are open to the public, and more than half are presented free of admission. Follow the links above for details of individual performances.

Advance tickets for performances at Meany Hall are available here.