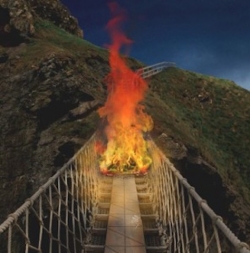 Composers on the program include Busnois, Machaut and Monteverdi, as well as modern neo-medieval artists Ted Hearne and Vaclovas Augustinas. The second half of the program features celebrated American composer Robert Kyr’s Songs of the Shining Wind with Elizabeth Brown, lutenist, and Romaric Pokorny, viola.

Program Detail
In Lithuanian folklore, a couple crosses over a threshold when they choose to marry, “burning the bridge” they willingly stepped over.  The professional singers of Solaris will look at courtship, adoration and passion, and spiritual union, while also reflecting on what is lost within life’s peregrinations.

Bio: Solaris Vocal Ensemble
Solaris Vocal Ensemble aims to encourage a renaissance of innovation in the field of choral music.  The group's debut project, sponsored by the Royalty Research Fund of University of Washington, was the commissioning of four new choral works, some utilizing electronics, by established American composers. These works were performed and recorded in 2012 by twelve of Seattle’s finest vocal artists, and released on the Albany Records label under the title Floodsongs.  Learn more about Floodsongs here.