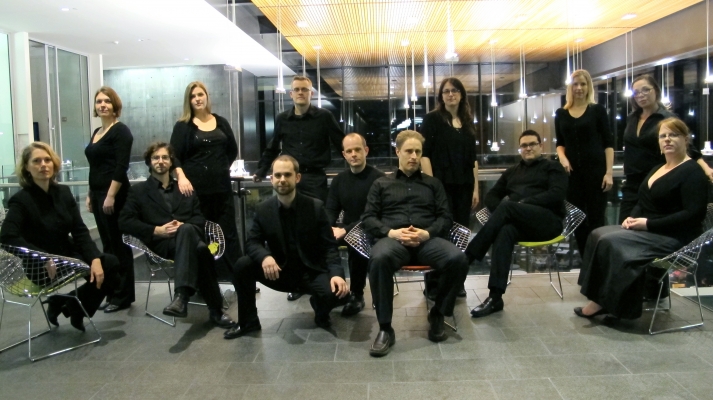 Solaris Vocal Ensemble joins with Seattle Modern Orchestra to present the Northwest premiere of Julia Wolfe’s Thirst, one of the parts of Water, an eight-part work by Michael Gordon, David Lang, and Julia Wolfe. In this powerful music with its nervous repetitive rhythms and swelling and receding chords, one can feel the intensity of the need for water (the thirst). In addition to choir which splits at times to twelve parts in the chords, the imaginatively deployed chamber orchestra includes electric guitar, vibraphone, piano, strings, woodwinds and brass. Thirst draws on text from the Old Testament prophet Isaiah: the poor and the needy seek water a thirsty man dreams he drinks in his dream but when he wakes he is faint and his soul longs for water Open the rivers in high places Open the fountains in the valleys I will make the wilderness a pool of water and the dry land springs of water I will pour water on the thirsty land and the floods upon the dry ground on the thirsty land.

Solaris Vocal Ensemble aims to encourage a renaissance of innovation in the field of choral music.  The group's debut project, sponsored by the Royalty Research Fund of University of Washington, was the commissioning of four new choral works, some utilizing electronics, by established American composers. These works were performed and recorded in 2012 by twelve of Seattle’s finest vocal artists, and released on the Albany Records label under the title Floodsongs.  Learn more about Floodsongs here.

Founded in 2010, Seattle Modern Orchestra (SMO) is the only large ensemble in the Pacific Northwest solely dedicated to the music of the 20th and 21st centuries. Led by co-artistic directors Julia Tai and Jérémy Jolley, SMO commissions and premieres new works from an international lineup of composers, in addition to presenting important pieces from the contemporary repertoire that are rarely if ever heard by Seattle audiences. The ensemble “operates at that exciting cusp between old and new, between tradition and innovation” (Vanguard Seattle) curating new sounds and experiences for concert goers in the region.

SMO provides audiences with performances of the best in contemporary chamber and orchestral music, and develops radio talks, lectures, and other forms of outreach in an accessible and inviting format all designed to expand the listener’s appreciation and awareness of the music of today.

Stuart Dempster, sound gatherer, trombonist, composer, didjeriduist, et al, and professor emeritus at University of Washington, has recorded for numerous labels including Important, Taiga, and New Albion. The latter includes “In the Great Abbey of Clement VI at Avignon”—a "cult classic"—and “Underground Overlays from the Cistern Chapel” consisting of music sources for a 1995 Merce Cunningham Dance Company commission. Grants are several, including being a Fulbright Scholar to Australia (1973), receiving an NEA composer award (1978), and a Guggenheim Fellowship (1981). Dempster’s landmark book The Modern Trombone: A Definition of Its Idioms was published in 1979 (reprint edition 1994). Commendations include Golden Ear Awards: Deep Listening (2006) and Earshot Jazz (2009); International Trombone Association Lifetime Achievement Award (2010). As a founding member of Deep Listening Band, he produced the first three recordings as well as three more recent recordings, including “Great Howl at Town Haul” CD and two LP projects from the January 2011 DLB residency at Town Hall Seattle, with major support by UW School of Music and DXARTS. DLB celebrated its 25th anniversary year on 5 October 2013 with “Dunrobin Sonic Gems” a spectacular concert near Ottawa in the amazing Dunrobin Sonic Gym (think five foot gongs!). DLB celebrated further with release of the concert CD “Dunrobin Sonic Gems” on Deep Listening, October 2014. In early 2015 he received two commissions, the first from dancer Holley Farmer and University of Washington Dance Program, and the second from artist Ann Hamilton and Henry Art Gallery.