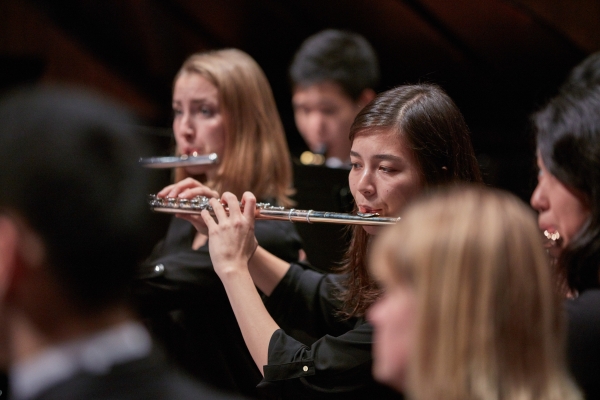 Bonnie Whiting performs, commissions, and composes new experimental music for percussion. She seeks out projects involving non-traditional notation, interdisciplinary performance, improvisation, and the speaking percussionist. She lives and works in Seattle, WA, where she is Chair of Percussion Studies and an Assistant Professor at the University of Washington School of Music.

Her debut solo album, featuring an original solo-simultaneous realization of John Cage’s 45’ for a speaker and 27’10.554” for a percussionist, was released by Mode Records in April of 2017. Her sophomore album Perishable Structures, launched by New Focus Recordings in August of 2020, places the speaking percussionist in the context of storytelling and features her own music as well as works by Vinko Globokar, Frederic Rzewski, Richard Logan-Greene, and Susan Parenti.

Recent work includes performances as a percussionist and vocalist with the Harry Partch Ensemble on the composer’s original instrumentarium, and a commission from the Indiana State Museum’s Sonic Expeditions series for her piece Control/Resist (2017): a site-specific work for percussion, field recordings, and electronics. Whiting has an ongoing relationship as a soloist with the National Orchestra of Turkmenistan via the U.S. Embassy Cultural Affairs Office, playing concerti in Ashgabat in 2017 and 2018. She collaborates frequently with percussionist Jennifer Torrence, giving concerts of new experimental work for speaking percussionists throughout Norway and the US. Her collaboration with multimedia artist Afroditi Psarra generated the album < null_abc >, released on the Zero Moon label in 2018. Their current project with designer Audrey Desjardins on transcoding data from IoT devices as performance received a 2019/20 Mellon Creative Fellowship. This project was explored in a workshop at the 2020 Transmediale Festival in Berlin, and currently lives as an interactive net art installation. 2021 brings the premiere of Through the Eyes(s): an extractable cycle of nine pieces for speaking/singing percussionist collaboratively developed with composer Eliza Brown and ten incarcerated women, and the world premiere of a new percussion concerto by Huck Hodge with the Seattle Modern Orchestra.

Whiting has presented solo and small ensemble shows at The Stone in New York, the Brackish Series in Brooklyn, The Lilypad in Boston, The New York City Electroacoustic Music Festival, at Hallwalls in Buffalo, the Tiny Park Gallery in Austin, The Wulf in LA, the Carl Solway Gallery in Cincinnati, The Grove Haus in Indianapolis, on the Wayward Music Series in Seattle, on tour throughout New Zealand, and at colleges and universities around the country. Whiting has collaborated with many of today's leading new music groups, including red fish blue fish percussion group, (George Crumb’s Winds of Destiny directed by Peter Sellars and featuring soprano Dawn Upshaw for the Ojai Festival), eighth blackbird (the “Tune-in” festival at the Park Avenue Armory), the International Contemporary Ensemble (on-stage featured percussionist/mover in Andriessen’s epic Die Materie at the Park Avenue Armory, and the American premiere of James Dillon’s Nine Rivers at Miller Theatre), Bang on a Can (Steve Reich’s Music for 18 Musicians for the LA Philharmonic’s Green Umbrella Series) and Ensemble Dal Niente (the Fromm Concerts at Harvard.)

Timothy Salzman is in his 35th year at the University of Washington where he serves as Professor of Music/Director of Concert Bands, is conductor of the University Wind Ensemble and teaches students enrolled in the graduate instrumental conducting program. Former graduate wind conducting students of Professor Salzman have obtained positions at 67 universities and colleges throughout the United States. Prior to his UW appointment he served as Director of Bands at Montana State University where he founded the MSU Wind Ensemble. From 1978 to 1983 he was band director in the Herscher, Illinois, public school system where the band program received regional and national awards in solo/ensemble, concert and marching band competition. Professor Salzman holds degrees from Wheaton (IL) College, and Northern Illinois University, and studied privately with Arnold Jacobs, former tubist of the Chicago Symphony Orchestra. He has numerous publications for bands with the C. L. Barnhouse, Arranger's Publications, Columbia Pictures, Hal Leonard Publishing and Nihon Pals publishing companies, and has served on the staff of new music reviews for The Instrumentalist magazine. Professor Salzman has been a conductor, adjudicator, arranger or consultant for bands throughout the United States and in Canada, England, France, Russia, South Korea, Indonesia, Thailand, Singapore, the Philippines, China, and Japan, a country he has visited twenty-one times. Recently he has frequently traveled to China where he served as visiting professor at the China Conservatory, given master classes for numerous wind bands, and conducted several ensembles including: the Shanghai Wind Orchestra, the People's Liberation Army Band, the Beijing Wind Orchestra and the Tsinghua University Band in concerts in 2016/2017/2018. He also served on three occasions as an adjudicator for the Singapore Youth Festival National Concert Band Championships. He has also conducted several of the major military bands in the United States including a 2019 world premiere with 'The President's Own' United States Marine Band. He is compiling editor and co-author (with several current and former UW graduate students) of A Composer's Insight: Thoughts, Analysis and Commentary on Contemporary Masterpieces for Wind Band, a five-volume series of books on contemporary wind band composers. He is an elected member of the American Bandmasters Association and is a past president of the Northwest Division of the College Band Directors National Association.

The University of Washington Wind Ensemble has performed at a number of prestigious music conventions, has presented several world premiere performances of outstanding new music for wind band and in 2004, undertook a highly acclaimed nine-day concert tour of the Kansai region of Japan, returning for more extensive tours of that country in 2007 and 2010. The UW Wind Ensemble presented several concerts in the main concert venues of Beijing, China in March of 2013, including a sold-out concert in the National Center for the Performing Arts in Tiananmen Square that was broadcast nationwide on China Central Television. The ensemble returned to China in both 2016 and 2019, playing before large crowds in Beijing, Shanghai, Xi'an and Chengdu. In the spring of 2006, the ensemble was invited by the Seattle Symphony Orchestra to present a concert at Benaroya Hall as a part of the Symphony’s Made in America Festival. The London Financial Times review of the concert applauded “music of surprising sophistication…Cindy McTee’s Finish Line pulsated energetically and William Bolcom’s Song was simply gorgeous.” Subsequent to the 2006 performance the ensemble was invited for return appearances on Seattle Symphony concert series in 2007, 2008 and, most recently in 2011 when Maestro Gerard Schwarz conducted the ensemble. The UW Wind Ensemble has collaborated with internationally renowned guest artists, conductors and composers including Eddie Daniels, Steve Houghton, Allen Vizzutti, Jeffery Fair, Chris Olka, James Walker, Douglas Yeo, Leigh Howard Stevens, David Maslanka, Michael Colgrass, Bonnie Whiting, Cindy McTee, Eric Ewazen, Satoshi Yagisawa, David Stanhope, John DiCesare, David Gordon, Mary Lynch, Seth Krimsky, Michael Brockman and Huck Hodge. Nihon Pals, a music education resource company based in Osaka, Japan, released a set of instructional DVDs regarding ensemble musicality featuring the UW Wind Ensemble.

Prior to joining the UW faculty, Morrison served as Lecturer of Fine Arts at the Hong Kong Institute of Education. He has spoken and presented research throughout the United States, as well as in Australia, China, Germany, Greece, Hong Kong, Hungary, Japan, Jordan, Korea, Italy, Malaysia, the Netherlands, Thailand, and the United Kingdom. During 2009 he served as a Visiting Fellow at the Centre for Research in the Arts, Social Sciences and Humanities and as a Visiting Scholar in the Center for Music and Science at the University of Cambridge.

Mark Tse is Director of Bands at SUNY Suffolk County Community College, conducting the Symphonic Band and Jazz Ensemble as well as teaching Understanding Music, Basic Musician ship and the History of Rock and Roll.

Previous to his graduate studies, Tse taught high school instrumental music for eleven years in the Toronto area, including concert bands, jazz ensembles, and classical guitar classes, and served as Department Head for many of those years. As a teacher, musical outreach was a priority as he forged new connections between area music programs and community bands, championing life-long music making.

Passionate about making music with people, self-proclaimed “band geek,” Taina Lorenz,
joins us from Edmonton, Alberta, Canada. Back home, she is Music Director of the
Cosmopolitan Music Society, a large adult community music organization of over 300
band, choir, and jazz musicians from beginner to semi-professional. Along with her
administrative duties, Taina conducts the Monday and Tuesday Bands, Summer Band,
and Chamber Winds.  Involved in many areas of the community, Taina also conducts the
Edmonton Schoolboys Alumni Band (The Edmonton Seniors Band), is Associate
Conductor with Mission Hill Brass Band, and teaches trumpet privately to students of all
ages. With her solid experience as both a conductor and trumpeter, including eighteen years of teaching instrumental music with Edmonton Catholic Schools, Taina is sought
after as a clinician and guest conductor in Edmonton, Western Canada, and the United
States. Taina has served on the board of directors for the Alberta Band Association, the Joint
Planning Committee for Music Conference Alberta, and is a member of Phi Beta Mu.