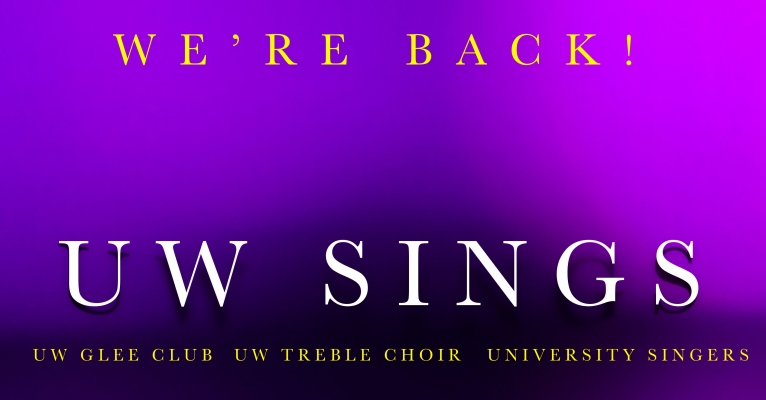 Masks are required  and patrons must show proof of vaccination or recent (within 72 hours of the performance) negative COVID-19 test for entry to all on and off-campus events presented by the School of Music or its degree-seeking students. Details of these policies and procedures are at: https://artsevents.washington.edu/covid-protocols

Tyler Todd Kimmel is a second year doctoral of musical arts student at the University of Washington. He was born and raised in Seattle, where he currently works as a collaborative performing artist and educator.

Passionate about music and theater, he has sought opportunities to maintain both mediums as a director of performing arts at Seattle Christian School, where he has grown the secondary choir programs and restarted the theater department. He also works with local professional and youth theater companies in their production and education departments, and works as a freelance actor and musician. As a composer, he has written several chamber pieces and solo works, two musicals, three film scores, and premiered incidental music for two plays at the Edinburgh Fringe Festival in Scotland. He is also an avid arranger, continually re-visioning and adapting works for his secondary choirs, and runs a voice and piano studio in south Seattle.

Before moving back to Seattle, Tyler served on the adjunct music faculty at Pepperdine University, where he music directed and conducted the orchestra for musical theater and coached voice students. While pursuing a masters degree in composition at Florida International University (FIU), he served as an undergraduate composition teacher, and was an assistant conductor for the FIU Symphony under international conductor, Gzregorz Nowak.

Tyler is a member of the National Association for Music Educators and the American Choral Directors Association. He is passionate about performing arts education for secondary students, and loves hiking, running, skiing, and watching hockey.

Alaskan Justin Birchell is a baritone, conductor, composer, and educator. He holds a BA in Music Performance (2019) and an MM in Voice Performance (2021), both from UCLA’s Herb Alpert School of Music. He is currently studying toward a DMA in Choral Conducting from the University of Washington. At UCLA, Birchell was a recipient of the Elaine Krown Klein Fine Arts Scholarship, The Mimi Alpert Feldman Scholarship, and two Dean’s Medals, and was a Fellow of the Gluck Fellows Music Outreach Program. Justin was a 2019-20 winner of the UCLA Philharmonia All-Stars concerto competition.

For many years, Justin was passionately active in the performing arts scene in his hometown of Anchorage, Alaska. He was the primary music director and singing teacher at TBA Theatre, Inc, an educational nonprofit, for four years. He music-directed TBA’s mainstage production of The Sound of Music and composed the live original score for TBA’s cirque nouveau spectacle Illusions: Wild Things, among many other projects there. For two years, Justin served as the choir director at Anchorage Unitarian Universalist Fellowship, where he also composed a number of original choral works. He also presented the workshop World Music as a Window on the Human Spirit to the Pacific Northwest District Assembly of the Unitarian Universalist Association. As an educator, Birchell has presented workshops, masterclasses, and guest lectures for the University of Alaska Anchorage, Palmer Arts Council, Anchorage School District and others. Justin was the 2018 winner of the Ted Stevens Young Alaskan Artist Award from the Anchorage Festival of Music.

Justin is also a passionate lover of wilderness, and before college, he spent over three years working in a remote wilderness lodge in the Brooks Mountain Range of Northern Alaska, about 250 miles from the nearest town (or opera house!).

As an opera performer, Justin began his career in Anchorage Opera’s chorus while still in high school and later sang the role of Sacristan in Anchorage Opera’s Tosca and Samuel in their Pirates of Penzance. Other notable opera roles include Figaro in UAA Opera’s The Marriage of Figaro, Dr. Falke and Herr Frank in Portland State University’s Die Fledermaus, Silvio in Opera Fairbanks’ I Pagliacci, along with numerous roles through Opera UCLA, including creating the roles of Manfred in Lost Childhood and Padre Antonio in Juana, both world premieres.

Birchell also remains active as a composer. His original song-cycle Three Nocturnes - Words of the Night was premiered at UCLA in June 2018 by soprano Stephanie Deprez and pianist Victoria Kirsch, and in June 2019 he sang the premiere of his own art song Aurora Aubade, on poetry from Alaskan poet Ian Colbert’s beautiful volume Midnight Elegies. Justin’s incidental music for The Death of Edgar Allan Poe traveled to Scotland in summer of 2018 for TBA Theatre’s production at the Edinburgh Fringe Festival. Justin's new work Why the Heck Not: Excerpts from a One-Man Music-Video Opera About the Time I Ran a Meme Page on Instagram Because it's a Pandemic and Everything is Ridiculous was included in his 2021 video recital, This is Just a Recital.

Anjali is a first-year in the Masters of Music in Choral Conducting program.  Before moving to Seattle, she was an active performer and conductor in the Southern California and Chicagoland areas, particularly centered in the intersection between music education, choral music, and community music making.

Anjali completed her Bachelor of Music Education from Wheaton College where she studied with John William Trotter and Mary Hopper.  She served as the Honors Conductor for the Concert Choir for two years as a creative and musical leader for many unorthodox projects such as: FEAST - an interactive exploration of the Shabbat dinner through the musical, theatrical, visual, and culinary arts;  Singing the Reformation - the premier of a semi-staged concert-length compilation of Michael Praetorius' poly-choral works; and, The Big Sing - a project of community building through choral music which included hundreds of "non-musician" singers and participants.  Following graduation, she was invited back to serve as a guest conductor to continue her work in choral improvisation and audience engagement with the Concert Choir through projects such as the WCC Chicago Weekend, which included multiple performances and engagements throughout Chicago from homeless shelters to churches, and to continue the Concert Choir's dedication to singing, teaching, and learning in the Sheridan Correctional Center.

An educator by trade and by heart, Anjali has taught Choir, Music History and Appreciation, and Music from Different Cultures in classrooms with students of all ages from K-5, to middle school and high school, to a community treble choir in the Chicagoland area, striving to utilize a student-centered and equity-based pedagogical approach.  She has also performed as an active Mezzo-Soprano soloist, chamber musician, and symphonic chorister to feed her love of the vocal instrument, and teaches voice lessons to students of all ages.  Anjali is grateful for the opportunities she has had to learn from master conductors such as Jerry Blackstone, Bruce Chamberlain, Simon Carrington, Geoffrey Boers, Giselle Wyers, John William Trotter, and Mary Hopper, and to sing under and absorb knowledge from many others, notably Rodney Eichenberger and John Nelson.  She hopes to utilize the wisdom and experience learned from her students and teachers to help expand the tradition of choral music to reach populations and transform individuals beyond the scope of the concert hall.