Chamber Singers reach for the stars in March programs 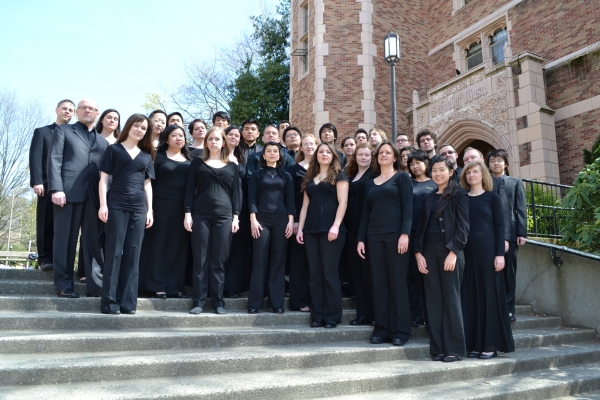 In their March 12 performance at Meany Theater, the University Chamber Singers, Geoffrey Boers, director, preview their upcoming appearance at the Northwestern Division of the American Choral Directors Association conference.

Choral director Geoffrey Boers’s attention is focused on several different priorities at once, but then again, that is nothing new. Director of the UW’s top auditioned choir, the Chamber Singers, Boers also serves as director of choral activities at the UW and in collaboration with colleague Giselle Wyers, oversees the UW’s highly regarded choral conducting program.

At present, he is preparing his singers for an ambitious program at Meany Theater on March 12, which will serve as a preview of the choir’s March 14 performance at Seattle’s Town Hall during the Northwestern Division of the American Choral Directors Association’s annual regional conference.

For this appearance, Boers will lead the choir through a 32-part arrangement of Swedish composer Ingvar Lidholm’s  motet  “...a riverder le stelle...” a modern choral work set to words from the conclusion of Dante’s Inferno. "It is an epic piece, rarely heard due to its complexity and vocal demands," Boers says. "The choir is treated as an orchestra, exploring extremes of range, dynamic, and color to paint the picture of the difficult path out of hell, and the small, but profound return to beauty."

The title, which translates to “and we beheld again the stars,” forms the theme of Boers’ program, which also includes star-related works by Claudio Monteverdi, School of Music choral conducting alumnus Eric Barnum, and the indie group Elbow.

In talking about the selections on the program, Boers creates connections between the songs that allow them to stand alone, yet also become part of something bigger, like individual stars forming the points of constellations in the night sky. “Monteverdi's madrigal Sfogava Con Le Stelle is an impassioned ode to the stars by a spurned lover,” Boers says. “He begs the stars to send his message of love to his beloved, and to help her pity him.” Barnum’s piece, he continues, “is a wonderful tale of love, and how one's love is inspired by, and compared to the stars.”

The group’s performance at the NWACDA conference is the second such invitation the ensemble has received in the past five years. Both Boers and Giselle Wyers, head of the UW’s Vocal Performance and Choral Conducting programs, stress that being selected to perform at a regional or national conference is a prestigious honor and a marker of excellence in the collegiate choral conducting profession.

“It takes tremendous effort to get to the level to be considered for these kinds of performances,” Wyers says. "Choirs must submit recordings across a three-year time span and demonstrate that they intend to program quality repertoire on the concert." The UW, she adds, has a long history of excellence in choral performance dating back at least to the 1930s and the formation of the Madrigal Singers, the precursor to today’s Chamber Singers.

Wyers directs the UW’s other top auditioned choral ensemble, the University Chorale, which also performs on the March 12 concert at Meany. Straying from the stellar theme, the Chorale will perform music written by composers from Argentina, Venezuela, Cuba, Spain, Chile, Italy, and the United States, with spotlight conducting turns for students Debi Johanson and Matthew Blegen.

More information and details about the March 12 performance at Meany Theater by the UW Chamber Singers and University Chorale is available here.